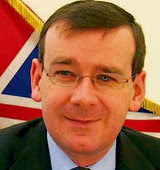 Raised on a small farm in Newry, Francis Campbell now moves in the corridors of power in the Vatican and Whitehall.

HOW MANY ambassadors to the Holy See have been appointed through open competition advertised in the Financial Times and the Guardian ?

How many have held summer jobs which, by turns, saw them work in Harrods, as a hospital porter, an aircraft cleaner and sandwich maker?

Or, indeed, how many such ambassadors took up that appointment at the young age of 35, having already served four years as a policy adviser and private secretary at No 10 Downing Street?

The answer, of course, is only one that we know of, namely Francis Campbell, current British ambassador to the Holy See.

Yet, arguably the most remarkable aspect of 38-year-old Newry-born Campbell’s CV is that he is the first Catholic to hold the position of emissary of the Court of St James to the Holy See since the Reformation.

For those like your correspondent, who were raised in midst of the bitter sectarian divide of Northern Ireland, it is always refreshing to encounter people who defy cultural stereotyping.

Francis Campbell, born to a woman from Galway and a man from Rathfriland, Co Down, grew up in a household where both parents were GAA enthusiasts and where much of his childhood summers were spent “across the Border”, either in Galway or Dundalk.

Educated by priests at St Colman’s in Newry and at St Michael’s in Omeath, Co Louth, Campbell, according to a clichéd view, looked like a young man headed for a career anywhere other than the British foreign service. How come a bright, politically engaged young Catholic northerner, who cut his political teeth in the ranks of the SDLP, ends up here?

Campbell has no difficulty with the question. He says simply that he is both “British and Irish” and that he is not “going to exaggerate one identity at the expense of the other”.

Having grown up with parents who had worked in London and Canada, far from the pressure cooker of sectarian tensions in the North, certainly helped. He also recalls the culture shock of his first summer visit to an uncle and aunt in London as a young teenager: “Growing up in the Troubles, you did not know any other world. For me, London was an exposure, in London your religion did not identify you, it wasn’t an issue. That took a lot of adjusting to. I realised the prism of the Northern Irish looking glass misshaped everything.”

Life on the small farm outside Newry was not always easy. The shortage of work and the sectarian violence of the times forced his father to leave home and find work in the mines in Canada’s North-West territories. For 17 years, his father would return home for a few weeks just once every year or 18 months.

Did he not feel angry at a bigoted Northern Irish state that had forced his father out? “I felt alienated growing up and for me faith was the way of dealing with that alienation.

“It can be very easy to be sucked into man-made divisions on the basis of one attribute. For me, the universality of Christianity and Catholicism challenges that, it asks you fundamental questions, by what standards do you want your life determined? For me, it was faith”

It comes as no surprise to hear Francis Campbell say that for a long time he considered becoming a priest. The church’s loss, however, was to be Whitehall’s gain. Having studied at Queens in Belfast, Leuven in Belgium and at the University of Pennsylvania, he joined the foreign office in 1997 aged 27.

When he returned recently to old alma mater, Queens, the careers officer said to him: “You’re the first student who has come back here to talk to our students about a career in the foreign office who is talking with a local accent. You do not know the difference that makes.”

Nowadays, he is occasionally contacted by someone from Northern Ireland applying for a job in the British diplomatic service. How should I handle the “Irish” question, he is asked? “My answer is ‘straight up’, you don’t have to turn your back on who you are to be a British diplomat. Be truthful, be honest, be proud of who you are and know that the system in London is open enough to be accepting of all.”

That system was certainly accepting of Francis Campbell, who within two years found himself in Downing Street, first as a policy adviser and then as a private secretary to prime minister Tony Blair. Of Blair, he recalls two things.

First, his remarkable ability to absorb pressure. Second, there was the day the prime minister had an audience with Pope Benedict. Unfortunately, that audience came right in the middle of difficult and very lengthy 27-country EU negotiations in Brussels about the Lisbon Treaty, negotiations in which the Polish delegation raised a number of issues.

Hoping to speed up the cumbersome process, French president Nicolas Sarkozy announced to the table that “Tony has got to see the Pope so let’s not drag it out.” At which point, Polish president Lech Kaczynski leaned across to Mr Blair and said: “Are these stories about you converting to Catholicism true, Tony?”

“Oh no, don’t tell me you are going to add that to your list of problems,” Blair replied.

Blair’s visit to the Holy See was not a casual matter. Campbell argues that in a post 9/11 world, religion plays a much more important role. Religion might seem like a marginal issue to western societies but this is not replicated around the rest of the world. When Gordon Brown recently visited Pope Benedict, it was the fourth visit by a British PM in the last six years. In the previous 30 years, there had been just one such visit, a reflection of the “growing importance” of the Vatican in domestic British politics and international relations.