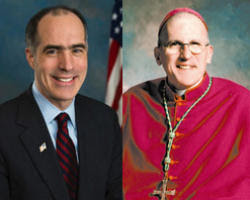 We have followed the clear, decisive, courageous and unrelenting defense of our first neighbor, the child in the womb, by Scranton Bishop Joseph Martino.

We have also followed his rebuke of the leadership of a Catholic College in his Diocese which sponsored a speaker who espoused positions clearly at odds with the moral teaching of the Church.

I recently wrote a piece intended to extol the Bishop. Within it I issued a somewhat “tongue in cheek” invitation for our readers and viewers to start a “fan club”.

The response was substantial. In fact, one of those who wrote actually did just that! This Bishop is capturing the attention and garnering the prayers and support of Catholics, other Christians, other people of faith and people of good will everywhere.

Now, after the Bishop had already corrected Catholic Senator Bob Casey, of the Scranton Diocese, for his vote against the Mexico City Policy and asked him to rescind it, Senator Casey has publicly questioned the Bishop’s assertion that his vote was improper for a Catholic in elective office.

This Bishop will have none of the sophistry demonstrated by the follow up statements from the Senator’s office indicating that his vote - which in effect allows U.S. Taxpayer funds to be used to promote Abortions overseas - was somehow actually a “pro-life vote”.

He has written once again to the Senator and we present this second letter in it’s entirety to our readers:

It is a matter of deep concern that your recent vote against the Mexico City Policy is continually misrepresented by your staff as a pro-life vote intended to promote “contraception and other family planning that avoid unintended pregnancies” (Times-Tribune, February 6, 2009).

The Mexico City Policy is, first and foremost, about abortion, not about family planning. First put in place in 1984, the policy required all non-governmental organizations that receive federal funding to refrain from performing or promoting abortion services abroad. The policy required such organizations to agree as a condition for receiving U.S. foreign aid dollars that they would “neither perform nor actively promote abortion as a method of family planning in other nations.” The policy included exceptions for abortions done in cases of rape, incest or life-threatening conditions.

Finally, it is never permissible to use immoral means such as artificial contraception to achieve a good end, namely, the reduction of unplanned pregnancies. In fact, the mistaken view that artificial contraception may be used to regulate population growth and the size of families has led to countless evils in America and abroad, including the attitude that having and raising children is a burden to be avoided. This attitude has contributed mightily to the acceptability of abortion as a means of contraception both at home and abroad.

My letter of January 30 urging you to rescind your vote on the Mexico City Policy was in no way mistaken regarding the nature and the effect of President Obama’s order to rescind America’s long-standing policy to avoid using U.S. tax dollars to support organizations that promote abortion abroad. It is imperative that this fact be made known to the public.

It is also imperative that there be utter clarity when it comes to the teaching of the Church on matters that pertain to the taking of innocent life and the special responsibilities that fall to you, Senator, as a lawmaker to oppose abortion and other clear evils.

In closing, I refer you to the words of Cardinal Francis George, president of the U.S. Conference of Catholic Bishops, to President Obama urging him to retain the Mexico City Policy.

The Mexico City Policy “. . . has wrongly been attacked as a restriction on foreign aid for family planning. In fact, it has not reduced such aid at all, but has ensured that family planning funds are not diverted to organizations dedicated to performing and promoting abortions instead of reducing them. Once the clear line between family planning and abortion is erased, the idea of using family planning to reduce abortions becomes meaningless, and abortion tends to replace contraception as the means for reducing family size. A shift toward promoting abortion in developing nations would also increase distrust of the United States in these nations, whose values and culture often reject abortion, at a time when we need their trust and respect.” (January 23, 2009).