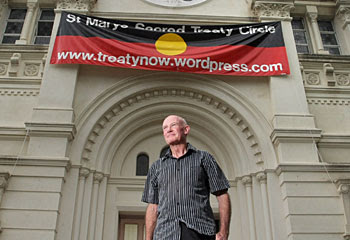 "The Archbishop is hopeful that through this process a dignified and peaceful outcome is achieved," the statement said.

A Catholic Church spokesman said he was unable to specify what issues Fr Kennedy had agreed to have mediated.

Earlier Fr Kennedy told The Courier-Mail his position had not changed, that he would not engage in mediation that was simply about his sacking after 28 years at St Mary's and 44 years as a priest.

He would, however, participate if the allegations made about unorthodox practices at St Mary's and the process the Archbishop had used to investigate the allegations, were included in the mediation.

Meanwhile, The Catholic Leader reports that incoming administrator, Fr Ken Howell, believes St Mary's parishioners "have a strong desire to do what is best for their community."

Police said that people attending services could be at risk as feelings among parishioners continued to run high over the cancellation of Fr Kennedy's appointment as administrator after 28 years at St Mary's.

Fr Howell said he had made the decision not to celebrate Mass at St Mary's "reluctantly".

"I acknowledge that there are some people hurting and confused by recent events," he said.

"One of my first tasks as administrator will be to initiate a process of healing and understanding.

"The important thing is that I want to start work as soon as possible.

"I'm keen to build on the good work that has been done by Fr Kennedy and the community of St Mary's.

Fr Howell said he would be assisted by Fr Gerry Hefferan who lives in Grovely parish. Fr Hefferan is a former chaplain to Brisbane archdiocese's Murri Ministry.

Fr Howell said last Tuesday it was uncertain whether he would be celebrating Mass at St Mary's this weekend.

Brisbane canon lawyer and chancellor Fr Adrian Farrelly told The Catholic Leader that St Mary's, under Fr Kennedy's leadership, had grown in many ways, such as concerns for social justice and becoming a welcoming community but many of his beliefs and practices were not those of the Catholic Church.

"What is at issue now and caused the Archbishop to act is that Fr Kennedy, as he is reported saying 'is embarrassed to be a Catholic'.

"He no longer believes in the Virgin birth and questions the existence of heaven and hell," Fr Farrelly said.

"His view of the role of the presider at the Eucharist and how to baptise is at odds with Church teaching.

"He has rejected Church discipline as regards who can be married in the Church. As a result, the Archbishop has lost confidence in Fr Kennedy's ability to shepherd a Catholic parish.