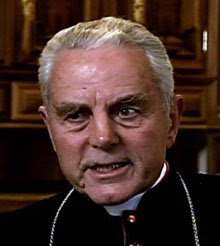 An apology issued by Holocaust-denying bishop Richard Williamson, whose rehabilitation caused a rift between the Vatican and Jews, is not acceptable, the Vatican said Friday.

Vatican spokesman Federico Lombardi said the apology was not addressed to Pope Benedict XVI nor to the Pontifical Commission Ecclesia Dei, which is responsible for healing relations between the Holy See and the traditionalist group to which Williamson belongs.

The apology ''does not seem to respect the conditions'' set out by Vatican Secretary of State Tarcisio Bertone, who earlier this month asked the bishop to ''distance himself from his comments on the Holocaust in an absolutely unequivocal and public manner''.

Lombardi described the apology as ''generic and equivocal''.

Williamson on Thursday apologised to Holocaust victims and the Catholic Church in a letter addressed to Cardinal Dario Castrillon Hoyos, the head of the Pontifical Commission Ecclesia Dei, which was cited by Catholic news agency Zenit.

On Friday the apology was also published in four languages on the website of his traditionalist group, the Society of Saint Pius X, which split with the the Vatican over the liberal reforms of the 1960s.

The bishop did not specifically retract his position, but expressed his ''regret'' for having claimed on Swedish television that there were no gas chambers and only 300,000 Jews died in the Holocaust, not six million.

''If I had known beforehand the full harm and hurt to which they would give rise, especially to the Church, but also to survivors and relatives of victims of injustice under the Third Reich, I would not have made them,'' he said.

Williamson said his comments were the ''opinion... of a non-historian'' that was ''formed 20 years ago on the basis of evidence then available and rarely expressed in public since. To all souls that took honest scandal from what I said before God I apologise''.

'As the Holy Father has said, every act of injust violence against one man hurts all mankind,'' he added, referring to an address by Pope Benedict XVI last month.

The Holy See has worked hard to close the rift with Jewish leaders caused after the pope last month rehabilitated Williamson, who had been excommunicated along with other Saint Pius X bishops in 1988.