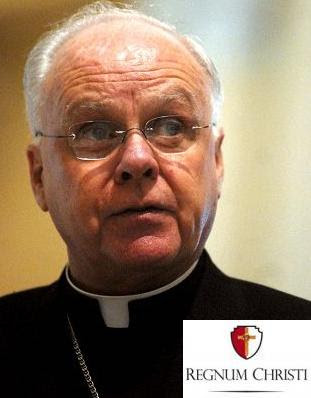 Concerned that the Legionaries of Christ order stifles the free will of its members and lacks transparency, Archbishop Edwin F. O'Brien of Baltimore told its director general in Rome that he cannot in good conscience recommend that anyone join the Legionaries or Regnum Christi, its affiliated lay movement.

In the Archdiocese of Baltimore, the Legionaries of Christ are affiliated with Woodmont Academy in the Baltimore suburb of Cooksville. Regnum Christi is also active in several parishes.

The archbishop's action came in the wake of revelations that the late Father Marcial Maciel Degollado, founder of the Legionaries of Christ, fathered a daughter while serving as leader of the international religious order.

Pope Benedict XVI had previously removed the Mexican priest from public ministry in 2006, asking him to lead a life of prayer and penance after Father Maciel faced allegations of sexual abuse of seminarians and financial irregularities.

"It seems to me and many others that this was a man with an entrepreneurial genius who, by systematic deception and duplicity, used our faith to manipulate others for his own selfish ends," Archbishop O'Brien told The Catholic Review, Baltimore archdiocesan newspaper, in a telephone interview following his Feb. 20 Rome meeting with Father Alvaro Corcuera, director general of the Legionaries.

Scott Brown, executive director of the Woodmont Academy, declined to comment to the Catholic paper and referred questions to Jim Fair, a U.S. spokesman for the order, who said that revelations about Father Maciel have been a "great shock" and "great disappointment" to members, but that the order has achieved "very positive things" for the church.

"We're processing that mystery, that the Holy Spirit could use what was very clearly a flawed instrument to do good," Fair said. "So while this is certainly disappointing, we have a charism that is approved by the church and we'll continue to work on behalf of the church on our various apostolic works."

Fair said he hoped the Legionaries will be able to prove to Archbishop O'Brien that "we have some value that would help his ministries and the archdiocese."

Archbishop O'Brien told The Catholic Review, "Father Maciel deserves our prayers, as every Christian who dies does, that he'll be forgiven and we leave the final judgment to God as to what his life and death amounted to."

Saying that the Legionaries' founder "leaves many victims in his wake," the archbishop called for the "full disclosure of his activities and those who are complicit in them or knew of them and of those who are still refusing to offer disclosure."

He added that the finances of the order should be opened to "objective scrutiny."

Archbishop O'Brien said he has grave concerns that the Legionaries foster a "cult of personality" focused on Father Maciel.

"While it's difficult to get ahold of official documents," Archbishop O'Brien said, "it's clear that from the first moment a person joins the Legion, efforts seem to be made to program each one and to gain full control of his behavior, of all information he receives, of his thinking and emotions."

The archbishop said many members who leave the order suffer "deep psychological distress for dependency and need prolonged counseling akin to deprogramming."

Saying that he knows there are good priests in the movement and acknowledging that Legionaries members are in full accord with the theological teachings of the church, the archbishop also said some of the practices of the movement are unhealthy.

"This is not about orthodoxy," he said. "It is about respect for human dignity for each of its members."

The archbishop noted that he has heard reports that the movement claims the first duty of a Legionary is to love the order. Such policies subject a person's use of reason not to one's own judgment but to that of a spiritual director, Archbishop O'Brien said.

"It's been said that the founder is alone called 'nuestro padre' ('our father') and that no one else can have that title," Archbishop O'Brien said. "All are bound to identify with him in his spirit, his mind, his mission and in his life. This would suggest that the very basis of the Legion movement should be reviewed from start to finish."

Last June, Archbishop O'Brien asked the order's leader to appoint a liaison who would inform the archbishop of all of the Legionaries' activities within the archdiocese. He also asked for more transparency of Regnum Christi programs and for the order to stop giving spiritual direction to minors.

"As far as we can judge, they are responding well to our requests," Archbishop O'Brien told The Catholic Review, "but these larger questions are looming ever more threateningly."

Father Maciel founded the Legionaries of Christ in 1941.