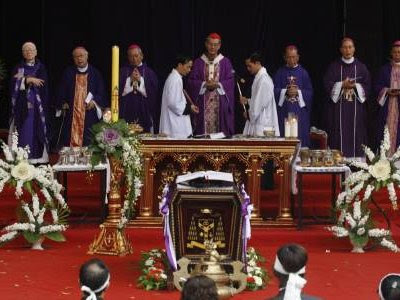 Thousands of Vietnamese Catholics wearing white headbands filled the streets and plaza in front of Hanoi's main cathedral on Thursday for the funeral of one of the country's two Cardinals, Paul-Joseph Pham Dinh Tung.

Tung died on Sunday at the age of 89 after a life serving the Roman Catholic Church in Vietnam, which included nearly three decades of virtual house arrest.

The Cardinal's death came after a year of increased tension between the Vietnamese Church and government over land disputes, but the police presence at the funeral appeared minimal and crowd control was being handled by the church.

In a telegram after Tung's death, Pope Benedict called the Cardinal an "eminent pastor who, through difficult circumstances, was able to serve the Church with great courage".

Vietnam is home to some 6 million Catholics, or roughly 7 percent of the population of over 86 million. The constitution guarantees freedom of religion, but religious activities remain under state supervision in the mostly Buddhist country.

The Communist government insists it respects human rights, but activists accuse Vietnam of criminalising dissent and prosecuting people for their political and religious beliefs.

After the Vatican named Tung bishop of Bac Ninh in 1963, his movements were monitored and he, like other priests, was restricted almost exclusively to his home, church sources said.

The Catholic news agency Zenit said he was unable to visit the more than 100 parishes in his jurisdiction.

However, Tung's funeral was a reminder to some of how conditions had changed over the years.

Pham Van Ngoc, 53, a retired employee of the culture ministry who came to the funeral, said the event itself, broadcast on closed-circuit TV to screens around the church and down nearby lanes, was a sign of progress.

"Faith is something that cannot be seen, but people must believe. As in a revolution if you really believe then you will be victorious," said Ngoc.

"The government persisted in placing restrictions on the organised activities of religious groups; however, in general restrictions were enforced less strictly than in previous years," the report said.

Tung's death potentially moves his successor as archbishop of Hanoi, Ngo Quang Kiet, closer to becoming a Cardinal, but that would require the consent of the central government.

Church and diplomatic sources say Hanoi city officials have asked repeatedly for Kiet to be moved out of the city for his support of prayer vigils last year over parcels of land in government hands that used to belong to the Church.

Tung was ordained as a priest in Hanoi in the 1940s, and led the Ham Long church from 1950. In 1954, after Vietnam was divided, millions of Catholics fled the Communist-controlled north, but Tung stayed.

As bishop of Bac Ninh from 1963-1990, Tung dedicated his time to compile stanzas of "luc bat", a type of writing that makes it easy to memorise facts, about the Gospels, Christian doctrine, Church teaching and the sacraments, Zenit reported.

Tung was appointed apostolic administrator of Hanoi in 1990 and in 1994 he was named archbishop of Hanoi. Pope John Paul II appointed him Cardinal later that year. He retired in 2005.