Taoiseach says only orders can decide future of bishops 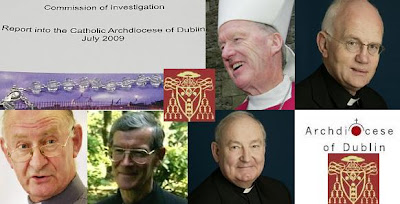 Taoiseach Brian Cowen has said it is up to religious organisations and their members to determine the "appropriateness" of individuals to hold ecclesiastical office.

In a statement issued this afternoon after a special Cabinet meeting, Mr Cowen described the findings of the Murphy Report into abuse in the Archdiocese of Dublin as "truly shocking and disturbing".

"It is a crushing verdict that the good name and standing of the Church as an institution was placed above the basic safety of children. Where this was facilitated by servants of the State, it was a betrayal of trust and a complete abandoning of duty", Mr Cowen said.

The Taoiseach stopped short of repeating yesterday's call by Fine Gael leader Enda Kenny for bishops implicated in the report to resign.

Mr Cowen said it was up to the religious institutions and their members to determine the "appropriateness" of any individual to hold ecclesiastical office.

"As to the implications for other individuals of the Report’s findings, I believe that just as there must be no ambiguity about the fact that all institutions and individuals are answerable to the law of the land, whatever their status, it is for those institutions and their members to determine the appropriateness of any individual to hold ecclesiastical office," he said.

Mr Cowen said it was the Government’s "priority" to ensure that the law was upheld and that perpetrators of abuse are brought to justice.

He called on anyone with information about abuse of children, "whenever and wherever committed", to contact gardaí.

Pressure on the five bishops who still hold office and whose handling of clerical child sex abuse was addressed by the Dublin diocesan report increased throughout yesterday.

Fine Gael leader Enda Kenny said all bishops implicated in the report should resign immediately. He said those who were in positions of authority in Dublin archdiocese, and who knew what was going on, should no longer continue in such positions.

Elsewhere former Labour Party leader Pat Rabbitte said that any bishop “directly implicated” in the Dublin report “should have no role as a school patron”.

In a separate development Garda Commissioner Fachtna Murphy yesterday ordered Assistant Commissioner John O’Mahoney to commence an investigation into the findings of the report.

They have shamed their Church as much as the abusers.

They have shamed us all. They cannot possibly remain in authority now.

The respect and the trust have gone. As long as they remain in office, evil will previal.
Send them away in shame and cleanse this church once and for all.