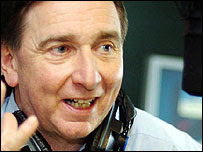 I must have read about a dozen reports from all over the world, from Boston right through to the Ryan report, the Ferns report, the Dublin report and reports from Australia, and they seem just the same.

Later in the 80s I began writing about this in the Sunday World and it was not believed, nobody believed that it was true. It began to seep through that things were happening because I knew about it from American contacts and I wrote about them and they were denied.

And the way in which the institution of the Church resisted any hint of anything being less than perfect within the institution to me is horrifying and degrading, and as I read it today I cannot but agree with the man who said "There is no future for that particular church".

Cardinal Law in Boston, who had an equal cover-up to all of this in Dublin -- and the reports of that are really as horrifying -- was held responsible for what had happened in Boston.

Where is he now? He was promoted to an office in Rome.

So don't tell me that this protection of the institution is not more important than the protection of children that is at the heart of the matter. It is when something that is supposed to be set up for the promotion of Christian values becomes more concerned about its own self preservation that the Christian values can go wherever they like as long as the preservation is maintained and anyone who steps out of line is hit over the head.

And if somebody had come and said they would have had no trouble at all removing that priest from office and silencing him, yet where a bishop comes in and says "we have three paedophiles we're covering it up" he becomes a cardinal.

And here's a very simple thing for you, every religious order, every diocese has a certain amount of paedophiles within them at the moment not working and not working as priests, but there's a very simple way the Vatican could easily say, as Canon Law does actively say, that all priests who have been involved in paedophilia activity should immediately be laicised, defrocked, call it what you like, so that they can never possibly act or go out into the shadow of being holy again.

If a priest left and wanted to get married to a woman they have no problem at all getting rid of a guy like that you know. So there's this sinister thing where, if you're in a diocese or an order where these guys are, they will resist everything that is done and they will pontificate and they will try to tell the rest of us how to lead our lives. I've experienced this at first hand and it is the most sickening, awful thing that you can imagine.

First of all, as a child, I was sexually abused by a priest. And at school, as a first year student, I was sexually abused by a priest of the order of which I now belong, and I've also been a superior in the order for a long time and every time you try to remove these guys from ministries you are met with the sternest opposition and there seems to be this idea that people should be given a second chance. There is a false sense of forgiveness, a false sense of loyalty.

My strongest argument in all of this is my only motto in life,

I've seen the devastation in people's lives, it is a horrendous crime and you know only somebody who has been through it at a deep level can understand -- and the bravery of the likes of Andrew Madden and Marie Collins and many, many others who have stood up to this institution is extraordinary.

Excellent man, says it exactly as it is! very brave indeed.

Brian D'Arcy makes me feel sick. He is one of the biggest hypocrites around.