Why Ireland Is Running Out of Priests 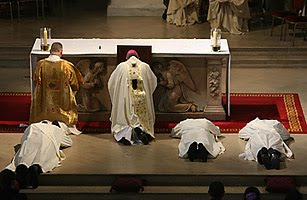 Hours: On call at all times.

He hasn't placed classified ads in the Irish press just yet, but according to Father Patrick Rushe, coordinator of vocations with the Catholic Church in Ireland, "we've done just about everything" else to attract young men to the priesthood.

And yet, the call of service in one of Europe's most religious countries is falling on more deaf ears than ever.

Earlier this month, the Archbishop of Dublin, Diarmuid Martin, made a grim prediction about the future of the church in Ireland: If more young priests aren't found quickly, the country's parishes may soon not have enough clergy to survive.

He told the congregation at St. Mary's Pro-Cathedral in Dublin that his own diocese had 46 priests aged 80 or over, but only two under 35 years old.

It's a similar story all over the island.

According to a 2007 study of Catholic dioceses in the Republic of Ireland and Northern Ireland, about half of all priests are between the ages of 55 and 74.

Ireland's ties to the Catholic Church run deep. The ordination of a family member was once regarded as a moment of great prestige, especially in rural areas. Even as recently as 1990, over 80% of Irish people said they attended Mass at least once a week.

But the country's relationship with the church began to change dramatically in the mid-1990s when Ireland's economy began to take off, ushering in years of unprecedented growth. Soon, disaffection replaced devotion among Ireland's newly rich younger generation.

Most devastating of all, however, were the sex-abuse scandals involving pedophile priests that surfaced around the same time. Criticism over the handling of the case of Father Brendan Smyth — a priest who had sexually abused children for over 40 years — even led to the collapse of the Irish government in 1994.

(Prime Minister Albert Reynolds was forced to stand down amid public anger over the lengthy delays in extraditing Smyth to Northern Ireland, where he was wanted on child abuse charges.)

But more was still to come. Last May, the government published the findings of a nine-year inquiry into child abuse at church-run schools, orphanages and hospitals from the 1930s to the 1990s.

The report, which described "endemic sexual abuse" at boys' schools and the "daily terror" of physical abuse at other institutions, shook Ireland to its core and left the reputation of the church and the religious orders that ran its schools in tatters.

Then, this week, another government inquiry found that the church and police colluded to cover up numerous cases of child sex abuse by priests in the Dublin archdiocese from 1975 to 2004, prompting the head of the Catholic church in Ireland, Cardinal Sean Brady, to apologize to the Irish people.

"No one is above the law in this country," he said. There are now calls for similar inquiries to be held in every diocese in Ireland.

The scandals have undoubtedly made it difficult to bring new men into the priesthood. Father Brian D'Arcy, superior of the Passionist Monastery in Enniskillen, Northern Ireland, says the only way to reverse the trend may be to relax the strict rules governing priests' lifestyles.

The vow of celibacy.

"Of course it would be a big help if priests were allowed to marry or if we could ordain married men," he says.

Earlier this month, he says, a priest in the Derry diocese, Father Sean McKenna, announced to his congregation that he was in a relationship with a woman and was stepping down. His parishioners gave him a standing ovation.

"Good men are being driven out by foolish [rules]," D'Arcy says.

But some clerical leaders say that allowing married or female clergy won't solve the problem. "They're easy solutions on paper but the crisis is deeper," says Father Patrick Rushe, vocations coordinator for the 26 dioceses in Ireland and Northern Ireland.

He points out that the Anglican Church, which permits both married and female clergy, is also facing a shortage of vocations.

"[Becoming a priest] is a lifetime commitment and a sacrifice. I think that's what's putting people off. It's not just celibacy," he says.

The church's solution was to launch a recruitment campaign last year, holding special Masses, workshops and conferences aimed at attracting young men to the priesthood. The initiative seems to have paid off, at least in the short term.

Last September, a total of 38 Irish men began to study for the priesthood at seminaries in Ireland and Italy.

The figure may pale in comparison to the 100 or so new seminarians who signed up annually in the 1960s, but it was the highest intake for the church in a decade.

Five years ago, there was only one ordination in Northern Ireland out of a Catholic population of 700,000 people.

"You're not just going to pull somebody off the street and they'll suddenly become a priest," Rushe says. "It's a decision that can take a long time to make."

Vincent Cushnahan, 29, currently the youngest serving priest in Ireland, says the church also needs to carry out structural reforms, such as cutting the number of parishes (and, therefore, the number of priests required to fill them) and giving greater responsibilities to lay people.

In some Irish parishes, for example, non-ordained church members are now responsible for roles such as youth ministry.

Cushnahan knows how hard it is for the church to recruit young men these days — becoming a priest was a difficult decision for him to make.

"I had to forsake married life, my own house, money," he says.