Pope says Christ is 'relevant' to all, addresses fight against AIDS 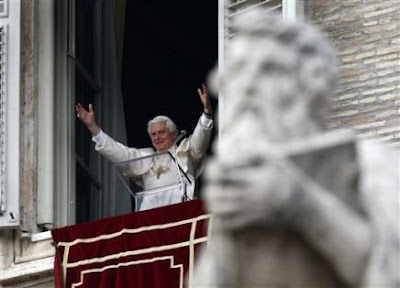 Pope Benedict XVI welcomed the beginning of a new liturgical year during his traditional addresses before and after the Angelus from the window of the Apostolic Palace on St. Peter's square today.

His words included a message concerning the relevance of Christ to all the world and prayers for the fight against AIDS.

Before reciting the Angelus, the Pope spoke to the thousands of pilgrims gathered in the square of how the liturgical year is seen from different perspectives and how Christ is relevant in all of them.

The Second Vatican Council, he said, established that the Church should "present the entire mystery of Christ in the annual cycle, from the Incarnation and Nativity to the Ascension, to the day of Pentecost and the expectation of the blessed hope in the return of the Lord."

The Holy Father presented a metaphor for the Council's insistence on the centrality of the liturgy of Christ, saying that He is like "the sun, around which, as planets do, revolves the Blessed Virgin Mary - the closest of all - and then the martyrs and other saints that 'in Heaven sing with God the perfect praise and intercede for us.' "

This, said His Holiness, is "God's part."

"And, what about the part of man, of history, of society?" asked the Pope of their part in the interpretation of the liturgical year. "What relevance do they have?"

"The answer is given to us through the path of Advent, that today we undertake. The contemporary world needs, more than anything, hope: developing countries need it, but also those that are economically evolved."

He said to always keep in mind that "we are on one boat and we should save each other together."

Especially in this time of crisis, the Pontiff told the crowd, "we need a reliable hope, and this is found only in Christ, who, as it says in the Letter to the Hebrews, is the same yesterday, today and forever."

"The Lord Jesus has come in the past, comes in the present, and will come in the future."

"He embraces all the dimensions of time, because he died and rose, he is 'the Living One' and while he shares our human frailty, he remains always and offers us the same stability of God."

The Holy Father explained that Christ is 'flesh' as we are, while at the same time being 'rock' as God is.

"Whoever yearns for freedom, for justice, for peace can rise again and raise his head, because in Christ liberation is nearby - as we read in today's Gospel (Lk 21, 28)"

Thus, said the Holy Father, "we can affirm that Jesus Christ does not only regard just Christians, or only believers, but all men, because He, that is the center of the faith, is also the foundation of hope. And every human being is in constant need of hope."

Pope Benedict then called for the Mass to be as the Virgin Mary, "who incarnates fully the humanity that lives in hope based on the faith in the living God," so as to "truly enter in this time of grace and reception, with joy and responsibility, the coming of God and our personal and social story."

After reciting the Angelus with the faithful, the Pope directed attention towards the coming World Day Against AIDS which will take place December 1, saying that his "thoughts and prayers go to each person afflicted by this illness, in particular the children, the very poor, and those who have been rejected."

The Church, he continued, is unceasing in its efforts in the fight against AIDS. He exhorted the crowd to focus their prayers and attention to those affected by the malady until "those affected by the HIV virus experience the presence of the Lord, who gives comfort and hope."

The Holy Father concluded this wish by expressing his constant hope that, by "multiplying and coordinating efforts," the world can "stop and defeat" this sickness.

In the Pope's words after his address, he made sure to welcome the Family Love Movement, a group of Italians who had walked across the city this morning in protest of the recent European legislation prohibiting crucifixes in classrooms.