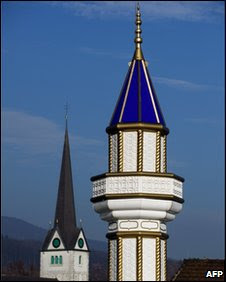 Projections from exit polls suggest that voters in Switzerland have backed a referendum proposal to ban the building of minarets, Swiss TV says.

The result is not yet official, but the BBC's correspondent in Berne says if it is confirmed, it would be a surprise.

The proposal was backed by the Swiss People's Party (SVP), the largest party in parliament, which claims minarets are a sign of Islamisation.

Opponents say a ban would discriminate and that the ballot has stirred hatred.

The government opposes a ban.

Switzerland is home to some 400,000 Muslims and has just four minarets. Official referendum results are due at 1700 GMT.

Partial results from the poll which closed at 1100 GMT indicated that the German-speaking canton of Lucerne accepted the ban, while French-speaking cantons Geneva and Vaud voted against, news agency AFP reported.

"The initiative would appear to be accepted, there is a positive trend. It's a huge surprise," French-language television said, 30 minutes after polls closed at midday.

Islam is the most widespread religion after Christianity in Switzerland, but it remains relatively hidden.

There are unofficial Muslim prayer rooms, and planning applications for new minarets are almost always refused.

Supporters of a ban claim that allowing minarets would represent the growth of an ideology and a legal system - Sharia law - which are incompatible with Swiss democracy.

But others say the referendum campaign has incited hatred. On Thursday the Geneva mosque was vandalised for the third time during the campaign, according to local media.

The BBC's Imogen Foulkes, in Bern, says the Swiss government fears banning minarets would cause unrest among the Muslim community and damage Switzerland's relations with Islamic countries.

Swiss President Hans-Rudolf Merz said: "Muslims should be able to practise their religion and have access to minarets in Switzerland too. But the call of the muezzin [call to prayer] will not sound here."

Amnesty International has warned that the ban would violate Switzerland's obligations to freedom of religious expression.

Sunday's referendum was held after the People's party collected 100,000 signatures from eligible voters within 18 months calling for a vote.

SVP member of parliament Ulrich Schluer said the referendum campaign had helped integration by encouraging debate. He rejected the charge of discrimination.

"Every Muslim is allowed to come together with other Muslims to have the religion together," he told the BBC.

"But a minaret is a political symbol. It is a symbol for introducing, step-by-step, Sharia rights also in Switzerland, parallel to the Swiss law which is a result of Swiss democracy. And this is the problem. It is nothing against Muslims."

In recent years many countries in Europe have been debating their relationship with Islam, and how best to integrate their Muslim populations.