Swiss to vote on minarets 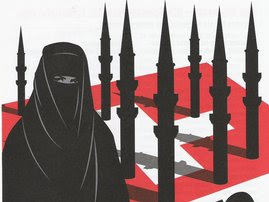 Switzerland is to vote in a referendum on a controversial call by the far-right for a blanket ban on the construction of minarets.

In a second referendum to be held on Sunday, the Swiss will also decide whether to stop weapons' exports, a proposal opposed by the government which has warned that restrictions on foreign arms sales could put some 5,100 jobs at risk.

But the spotlight is likely to be trained on the anti-minaret proposal, which was brought by a far-right party and claims that the turrets or towers attached to mosques symbolise a 'political-religious claim to power.'

The Swiss government has asked the population to reject the call, arguing that accepting a ban would bring about 'incomprehension overseas and harm Switzerland's image.'

The ruling Swiss People's Party (SVP) had forced a referendum under Swiss regulations on the issue after collecting 100,000 signatures within 18 months from eligible voters.

In a bid to push their case, the SVP has turned to a controversial poster campaign depicting a burqa-clad woman against a background of a Swiss flag upon, which several minarets resembling missiles are erected.

The poster sparked uproar in some quarters, with Switzerland's Commission Against Racism saying that the campaign defamed the country's Muslim minority, stirred up hate and could threaten public peace.

Determined to stop the SVP from gaining sympathisers to their cause, the government issued statements calling on the population to vote against the proposal on several occasions.

Religious groups, including Christians, Jews and Muslims, also came out in a rare show of unity against the right-wing proposal.

Islam is the second largest religion in Switzerland after Christianity with 400,000 followers out of a population of 7.5m.

Four minarets have been built and the construction of a fifth is planned.