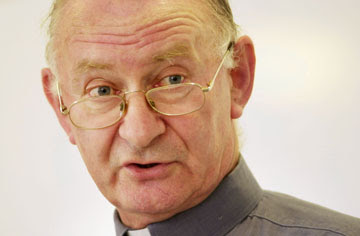 EMBATTLED Bishop of Limerick, Donal Murray was last year linked to a controversial attempt by a Church body to prevent the publication of the damning Cloyne report into clerical sex abuse.

He was also the bishop whose diocese caused such anguish to abuse victim, Peter McCloskey that he died by suicide two days after attending mediation talks with Bishop Murray, his legal advisor, Diarmuid O’Catháin, a nun, a priest and a One in Four representative.

Bishop Murray is now under fire for what the Judge Yvonne Murphy report described as his "unacceptable" and "inexcusable" behaviour in failing to fully investigate allegations about Fr Tom Naughton made in Valleymount in 1983 and a failure to communicate these allegations after official complaints emerged from Donnycarney later on.

Yesterday on local radio, he said "The question whether I remain on as far as I am concerned is a question for the people and priests of Limerick."

Last summer, a threatening legal letter was sent by the Interdiocesan Case Management Advisory Committee – appointed by the Bishop of Cloyne, John Magee and Bishop Murray – to the National Board for Safeguarding Children (NBSC).

The advisory committee were answerable to the Cork and Limerick Bishops.

Bishop Murray said last night he was not aware of the letter until after it was sent.

The letter suggested parts of the NBSC report, which caused national outrage last year, were untrue. It stated that if the report is issued "in its present form or includes its distortions in your forthcoming annual report, we shall have no choice but to seek remedies in either ecclesiastical or secular courts or both."

Written by a number of senior priests and five lay people including the then Cloyne solicitor, Diarmuid O’Catháin, the letter was sent to the Board in July.

In the letter they asked the NBSC to meet with the committee, saying if it wouldn’t, they would take that as "a further expression of recklessness and indifference and disregard for the truth, which could be considered as malice as it is known to the law".

"Your report seriously wrongs the Diocese of Cloyne and our committee," the letter stated.

Last night, when questioned about the culture of cover up in the Dublin Archdiocese, Bishop Murray flatly denied he was part of such a culture.

"I wish to state that I never deliberately or knowingly sought to cover up or withhold information brought to my attention. There were, as the report notes, occasions when roles or responsibilities were not clear or where I did not have full information concerning cases in which I was asked to become involved," he said.

"As I indicated in 2002 in response to one particular case, if I had succeeded in deriving more information, it might have been possible to prevent some of the dreadful suffering of child abuse in that instance. I very much wish that I had been able to do so.