'My abuser then went on to molest at least seven others' 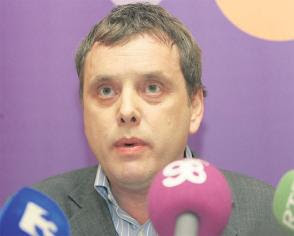 I was a little emotional on 'Prime Time' on Thursday night. No one was more surprised than I was; I'm more used to being composed and articulate.

But even though I had anticipated the essence of the Murphy report, I will never get used to reading about priests (or any adults) "swimming nude with young boys in a swimming pool in the back garden", "photographing children in sexual postures alone and in groups", "liking physical intimacy with children", "knocking a boy unconscious", "kissing young girls in confession" or "putting a hand down the trousers of a nine-year-old girl".

To read chapter after chapter of this disgusting behaviour is deeply upsetting for anyone with any regard for the safety and welfare of a beautiful child, as all children are. As if this wasn't upsetting enough, we then read about what action was taken when bishops and priests were notified of the above abusive behaviour.

The report finds that after allegations were received, bishops and priests:

When I was 17 years old, I told our school guidance counsellor, Ken Duggan, that I had been abused by Fr Ivan Payne for nearly three years up to aged 14.

Some months later it was reported back to Mr Duggan that Fr Payne had accepted that my allegations were true and he was eventually removed from our church in Cabra.

He said there had been a complaint from a 17-year-old about inappropriate contact with Fr Payne.

He totally failed to mention that I was 17 now but the inappropriate contact was actually molestation, and had occurred when I was 12 to 14.

Shortly after the medical assessment, Fr Payne was moved to his new parish in Sutton. The Murphy report finds that he abused at least seven more boys after that time, though a total of 31 people made allegations against him. This, for me, is the worst single fact that has come out of this report time and time again.

Whether they manipulated information and medical professionals to get favourable but useless medical reports or wrote favourable letters of reference for paedophile priests moving on to other dioceses, they are absolutely responsible for the abuse of every child after that point.