Connell's right-hand man refused to give all details to gardai 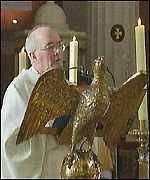 A CHANCELLOR in Dublin archdiocese who dealt with many of the complaints of clerical sex abuse failed to tell abuse victims about other complaints against their abuser.

The report found that although Monsignor Alex Stenson -- who was the right-hand man of the then archbishop, Desmond Connell, in the 1990s -- carried out the investigation of complaints "superbly", he was "less successful" in dealing with complainants.

He also told gardai he would not have written a letter to a victim about her abuser priest if he had known she would give it to the authorities.

The report found that although Monsignor Stenson did generally believe the complainants, he did not tell them so.

The commission is also critical of his failure to validate complainants as he chose not to tell them there were other complaints about the priest in question.

Many complainants found Monsignor Stenson to be personally kind while a number were severely critical of his approach to them.

However, it is notable that some of the priests at the centre of the complaints clearly considered Monsignor Stenson to be their scourge.

He was conscious of the need for monitoring but was not himself in a position to require or enforce such monitoring unless given specific authority. When he was given the authority to do so, he did try to ensure that the priest abided by restrictions placed on him.

However, in the case of Marie Collins and her abuser, Fr Edmondus, Monsignor Stenson did not tell her of other allegations of abuse. He later made a statement to the gardai after receiving permission from the archbishop.

"He said the same oath of secrecy prevented him from making a further statement to the gardai about his preliminary investigation of the Fr Edmondus case," the report stated.

He refused to give his Fr Edmondus file to the gardai in 1996, saying he would need legal advice first.

"He said that canon law did not permit him to give permission for the file to be read," the report states.

He was said to have "expressed dismay" on seeing the gardai had possession of the letter he had sent to Mrs Collins, adding that he would not have written it if he knew she would hand it over.

"Despite having told Mrs Collins that Fr Edmondus had admitted to her abuse, Monsignor Stenson refused to make a statement to that effect to the gardai," the report states.

It goes on to say his failure to disclose all available information to the gardai is a "cause of concern to the commission".

"He left Mrs Collins in a difficult situation by telling her that the priest had admitted her abuse and then not acknowledging that to the gardai."

The report also stated: "Everything that Mrs Collins managed to extract from the archdiocese over the years in relation to the handling of child sexual abuse was given grudgingly and always after a struggle."

The report concluded that Monsignor Stenson "performed his task better than other office holders in the archdiocese".

Monsignor Stenson is currently parish priest in north Dublin. He did not return calls yesterday for comment.

For decades I have been absent from Church because these sleeze balls made me unwelcome and inferior to their regime.

TODAY I WILL RETURN TO MY CHURCH AND TAKE BACK MY CHURCH FROM THESE IDOLISED FUCKS THAT HAVE CRUMBLED ITS FOUNDATIONS. ITS TIME FOR THE TRUE LEADERS TO ASCEND TO THE BISHOPS THRONE.

"Never ascribe to malice what can be sufficiently explained by stupidity." Mark Twain

Stenson and his ilke should be kicked out! Church should be for god fearing people, not these evil immoral men.

Connell's man needs a kick up the arse!