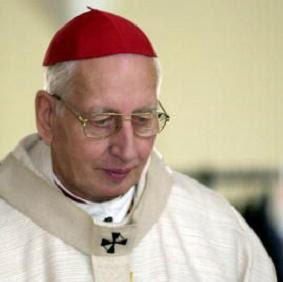 When Cardinal Desmond Connell lied to RTE, he did so carefully.

He used a 17th-century variation on a 13th-century philosophical technique employed by the heavies from the Catholic Church elite.

This enabled him to deceive RTE and the public while keeping a clear conscience.

What a clever, learned man.

How adeptly he used this ancient manoeuvre to protect his standing and power.

And how recognisable the technique is, to those of us familiar with the skills of modern politicians.

The Murphy report -- mercifully -- doesn't go into the relentless detail that was appropriately used when the Ryan report described the frightful abuse heaped on children.

Some detail is unavoidable, but by now we are all so sickened by this squalid affair that a simple statement that abuse took place is usually sufficient to convey the dreadfulness.

Instead, the Murphy report emphasises the abuse of language, logic and conscience, by bishops, senior policemen and others, as they protected the abusers and thereby allowed the abuse to continue for years after it might have been stopped.

Each report serves us well. Ryan described the horror of what was done, how widespread it was and how it went on and on and on.

Murphy describes the techniques of self-defence employed by powerful individuals, and a dominant institution, to try to protect and preserve that power and dominance.

And Murphy shows the role played by obsequious cheerleaders and facilitators -- and by a deferential Catholic laity. There is evidence of others for whom the law and the protection of children was paramount.

Garda Finbarr Garland was less than a year on the force in 1983. By his own standards, he didn't do anything extraordinary. He simply did his job, thoroughly, when two boys complained of abuse by a priest. His immediate superiors, a sergeant and inspector, backed him without fuss.

The logic behind the cover-up was that the souls of the ignorant laity, and the proper direction of Irish society, were best left in the hands of a powerful, paternal Church. Anything that might reduce that power was bad. And if protecting the Church meant covering up widespread child abuse, so be it. And if that meant that abusers had to be moved on to fresh fields of abuse, so indeed be it.

In 1995, Cardinal Connell was in a dilemma -- young Andrew Madden was pursuing his abuser, Fr Ivan Payne, through the courts. Payne needed money to try to kill the case, so Connell gave it to him, from church funds. Questioned by Joe Little of RTE, Connell denied church funds were used for that purpose.

Happily, Cardinal Connell was familiar with the doctrine of "strict mental reservation". This allowed him to say one thing and mean another. Because God knew what was in his mind.

Even by the lights of his own theology, Connell was lying.

The classic example of the doctrine of 'mental reservation' is this -- suppose a man is being hunted and you help conceal him but those eager to kill him demand that you tell them where he is. You may say, "He didn't come through here", thereby misleading them. But (and I bet Cardinal Connell gets a kick out of this), as you say this you covertly point your finger up your sleeve.

By "through here" the hunters think you mean the building or area. But God sees your pointing finger and your mental reservation, so you mislead the hunters by literally saying the guy didn't go through your sleeve. And you keep a clean soul by not literally telling a lie. Lord, they must have had a barrel of laughs back in those late medieval days. ("So, I stuck the oul' finger up me sleeve and, says I to him. . .")

Taking the most tolerant interpretation of this carry-on, the doctrine of mental reservation was supposed to allow priests to maintain the secrecy of the confessional, or to protect the innocent in peril. To claim it includes concealing the Payne cover-up and preserving Cardinal Connell's standing is just silly.

In politics, simple truth and transparency are abominations. Back in the early Nineties, at the Beef Tribunal, Fianna Fail's Ray Burke explained that if the opposition "don't ask the right questions they don't get the right answers".

Remember how Fianna Fail stated categorically that they would not bring in benefit cuts after the 2002 election? They couldn't have been more explicit. But they had a mental reservation. And immediately after they won the election they explained that they hadn't had an intention of bringing in cuts, but they had intended to make "adjustments".

Back in the Eighties, Charles Haughey, in opposition, denounced the fact that: "Health Cuts Hurt the Old, the Sick and the Handicapped." He won the election and imposed deeper health cuts -- his mental reservation allowed him to denounce cuts as long as he didn't deny that he would impose even worse cuts himself. All for the greater good.

The Catholic bishops had four conditions that allowed them to stand back as children were abused: 1) They believed they were serving a higher purpose, the protection of God's Church and their power in the land. 2) Powerful people in their own ranks, and within the police, supported their position. In return for power, the Church looked after unwanted children, provided health and education services -- not in addition to state services, but as a substitute. Grateful politicians deferred to whatever the clergy thought best. 3) The media was submissive -- in those days, when journalists met bishops they literally kissed their rings.

And 4), and probably most important, the Catholic laity were obedient. Murphy tells of parents who knew their child had been abused and complained to the Church. For this they were ostracised by their devout neighbours -- to the extent that they later wouldn't complain to the police. For the laity, accepting that the allegations were true would undermine basic beliefs.

We can see a parallel in today's politics. Huge decisions are being made that will have long-term consequences for our children and theirs.

The reasoning behind the decisions is Jesuitical, and some of the alleged truths on which those decisions are supposedly made ("credit will flow") are transparently false. But people who should know better are compliant -- because confronting the reality of what's happening is too daunting.

While it's undeniable that churchmen such as Diarmuid Martin are genuine in their regret and in their concern for children, as an institution, the Catholic Church's abhorrent record has broken its power in this country.