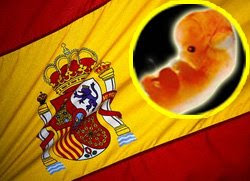 The Catholic Church will deny communion to Spanish members of parliament who have voted in favour of a bill to make abortion more readily available, the spokesman of Spain's Bishops' Conference said today.

"This is a warning to Catholics, that they can't vote in favour of this and that they won't be able to receive communion unless they ask forgiveness," Juan Antonion Martinez Camino told a news conference.

"They are in an objective state of sin," he said.

The government-sponsored bill, which passed the first of a series of votes in parliament yesterday, will allow abortion until the 14th week of pregnancy and, in cases of extreme foetal deformity, at any time in the pregnancy.

The bill will also allow girls to obtain abortions from the age of 16 without parental consent, a clause that has generated dissent even within the governing Socialist Party.

Abortion is currently allowed only in cases of rape, a malformed foetus or if the pregnancy endangers the physical or mental health of the mother.

In practice, Spain has a higher rate of abortion than some countries with more liberal laws, because many Spanish doctors are willing to attest to the danger to the mother's psychological health.

Hundreds of thousands of people marched against the abortion law in Madrid last month. But the government, which has fallen slightly behind the conservative opposition in opinion polls, calculates that the bill has strong support among left-leaning voters.