Martin: Is there a paedophile ring? 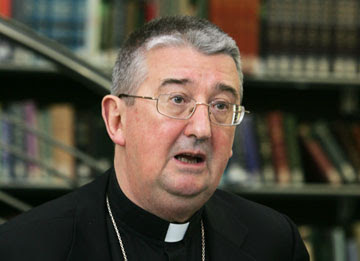 THE ARCHBISHOP of Dublin, Diarmuid Martin, asked the gardai to investigate whether a clerical paedophile ring was operating in the archdiocese.

Dr Diarmuid Martin made the request to the National Bureau of Criminal Investigations after he examined files on paedophile priests in recent years.

He was disturbed by close connections between a number of clerics who were later convicted of child abuse, according to sources, and asked gardai to investigate.

The priests included Fr Bill Carney and Fr Francis McCarthy, neither of whom are any longer in the priesthood, and Fr Patrick Maguire, a Columban priest, who is living under the strict supervision of his order.

The three are among 46 priests named in the damning report by Judge Yvonne Murphy which found "no direct evidence" of a paedophile ring but found "worrying connections" between a number of priests.

Fr Carney and Fr McCarthy worked together to prey on vulnerable children, visiting them in children's homes and, in at least one instance, abused the same child. Fr Carney and Fr Maguire brought children on swimming excursions together. Fr Carney also claimed that Fr Maguire could vouch for him when he was under investigation for abusing some of those children.

Fr Dominic Savio Boland, whose real name is John Boland, called to the home of a child who had been abused by another priest, Fr Ioannes, and proceeded to abuse the child himself.

"There is nothing in the evidence available to the commission to show how Fr Boland became aware of this young boy," the report said.

Another priest, Fr Horatio, was given the use of a holiday home by Fr Sean Fortune, a notorious child abuser in the Wexford diocese.

The report says that "Archbishop Martin has referred some of these matters to the gardai in recent times". Sources close to the archbishop said he was concerned at the connections between the priests and asked the gardai to investigate whether a paedophile ring was operating in the clergy.

A Garda spokesman declined to comment on a paedophile ring, but sources said all links between these priests and others in the archdiocese would be investigated.

The findings of the commission on child sex abuse in the archdiocese have had profound ramifications with mounting calls for the immediate resignations of serving bishops who are criticised in the report and a high-level Garda review of the report's findings on collusion and cover-up.

Taoiseach Brian Cowen yesterday stopped short of repeating Fine Gael calls for the resignations of serving members of the hierarchy. In a statement yesterday, he said it was up to religious organisations to determine the "appropriateness" of individuals to hold ecclesiastical office. Catholic bishops are expected to issue a statement on the report today.

In another development Minister for Foreign Affairs Micheal Martin is considering calling the Papal Nuncio to account for ignoring requests for information from Judge Yvonne Murphy.

A source close to the minister said that he is considering the unprecedented diplomatic move on foot of the Murphy report's revelation that the Nuncio, the Pope's ambassador in Ireland, ignored a request to disclose files to the Commission.

A second request to the Vatican for files passed to it by the Dublin office was also ignored.

A Vatican spokesman, Fr Federico Lombardi, was quoted as saying that the commission did not go through the proper diplomatic channels.

Colm O'Gorman, the veteran campaigner against clerical sex abuse and director of Amnesty said: "I would expect the Minister for Foreign Affairs to summon the Papal Nuncio to Iveagh House to explain why his State failed to comply with the statutory inquiry and on what basis they felt it was appropriate to ignore the request. He is a diplomat; the minister should have him explain himself."

John O'Mahony, an assistant Garda commissioner appointed to review the Murphy report on Friday, is to meet officers from the Garda sexual assault unit this week.

The failings of some gardai were amongst the most surprising findings of the Murphy report, with former Garda commissioner Daniel Costigan among those criticised for passing a complaint about a priest to Archbishop John Charles McQuaid.

The relationship between several senior gardai and priests and bishops was inappropriate. However, several gardai were praised, one of them Finbar Garland, now a sergeant, who successfully prosecuted Fr Bill Carney for indecent assault. The report found that Bishop James Kavanagh attempted to influence the investigation through his contact with a chief superintendent.

Sgt Garland, who now heads the stolen car unit, told the Sunday Independent that there was never a suggestion to him at the time that the investigation should be blocked. "I was less than a year in the job. When you see two young boys of eight or nine years of age, holding their dads' hands, and they are looking up at you and they are actually frightened and in fear, because they think they had done something wrong, that annoyed me more than anything else," he said. "I was disgusted that anyone could do that to a child."

Of the 46 priests in the report, 14 are dead and a number are believed to be unsupervised and living freely in the community either in Ireland or abroad.

Nine of the 46 are laicised. They include Fr Francis McCarthy, who abused children in collusion with Fr Carney. Another priest, known as Fr Donato, is now married and has a child.