In offer to step down, Bozek makes St. Stanislaus fight about him 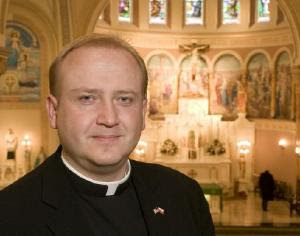 As he changed out of his vestments following St. Stanislaus Kostka's 11 a.m. Polish-language Mass on Sunday, the Rev. Marek Bozek explained away his big announcement as nothing more than "an update."

A trial date had been set in St. Louis Circuit Court in the church's ongoing battle with the St. Louis Archdiocese, and he was simply giving his parishioners its status.

"With the lawsuit set for trial in February and the intensity of preparation ramping up, I thought it appropriate to comment at this time," he said at Mass.

The archdiocese, along with some former St. Stanislaus board members, filed a lawsuit in July 2008. If it wins, the Roman Catholic church will regain the authority to assign the church's pastor and approve its board. Bozek would be out of a job.

But Bozek's announcement during last weekend's Masses seemed designed to pre-empt that eventuality. He said he would be "delighted" to remain as St. Stanislaus' pastor "for many years" but that he also was willing "to do what it takes to resolve this controversy."

"If it is necessary for me to step aside and continue my ministry elsewhere, I am willing to do that," he said, "so long as I know that you will not go without pastoral care and the sacraments."

"He's said this all along," said Baras. "He's just giving us the option."

"If that opens up an avenue for reconciliation, that would be a wonderful thing," Bernard Huger, an attorney for the archdiocese, said Sunday. "Clearly we don't want to have a trial, we just want to have St. Stanislaus returned as a Catholic parish."

In a statement to the Post-Dispatch, St. Louis Archbishop Robert Carlson said the archdiocese has been praying "for the reconciliation between the people of St. Stanislaus and the Roman Catholic church."

"As a church, we are always interested in healing and reconciliation," Carlson said.

St. Stanislaus was founded in the 19th century with a unique structure that allowed it to manage its own finances and property. Tension between church members and the archdiocese heightened in 2004, when former St. Louis Archbishop Raymond Burke demanded that the church conform to the same legal and financial structure as all other parishes.

The church's lay board refused and changed its bylaws to eliminate the archbishop's authority. Burke responded by pulling the church's priests.

In 2005, the lay board named Bozek — then a priest in the Springfield-Cape Girardeau diocese — as its pastor, something only bishops can do.

Burke excommunicated Bozek, along with a succession of lay board members, and stripped the Polish church of its standing as a Roman Catholic parish.

The Polish-born Bozek was hailed as a hero by St. Stanislaus members in 2005 for risking his vocation to lead a church some Catholics felt had been abandoned by the archdiocese. But over the last three or four years, Bozek's version of Catholicism drove away many of the church's traditional members.

At the same time, his support for homosexuality in the church and women's ordination brought in a new group of parishioners.

Some of the original excommunicated board members turned against Bozek, and he engineered their removal from the board. Last year, a few of them reconciled with the church, then joined the archdiocese in its lawsuit against Bozek and the current board.

Huger said if Bozek steps down, "he's taking a big step," but he said Bozek's departure isn't the only obstacle the archdiocese faces in regaining the church.

"The rest of the parish would need to want to get back in communion with the church," Huger said. "And the board has something to say, but over time, there could be a changing personality on the board."

In his announcement Sunday, Bozek — who was laicized, or defrocked, by Pope Benedict XVI in January — reminded his parishioners that the battle with the archdiocese "began long before I came to St. Stanislaus."

"This controversy and this lawsuit are not about Marek Bozek, they are about St. Stanislaus and its future," Bozek said. "When I came here, I pledged to remain your pastor as long as you would allow me to serve."

He reminded his flock that when he arrived in St. Louis from Springfield, he "came here as a pastor."

"I came to provide pastoral care, love and support for this parish that had been treated so poorly," he said. "I did not come as a lawyer, to take sides in a lawsuit or to be on the news."

Inside the Polish Heritage Center on Sunday, current and former members with starkly different views on the church's current direction argued over one thing: Marek Bozek.

Voices were raised, fingers were thrust in faces, profanities echoed around the cavernous hall.

After a particularly tense moment, Melissa Kirkiewicz, a Bozek supporter, charged outside for some fresh air.

"I grew up here, my kids were baptized here, this is my family," she said. "But if he leaves, I leave."

Yes, as with everything involving Marek Bozek, it is about him. He is a trained thespian after all. St. Stan's and the church alter make a perfect stage for him on a weekly basis.