'We were baring our souls to them in confession. I am very angry about it' 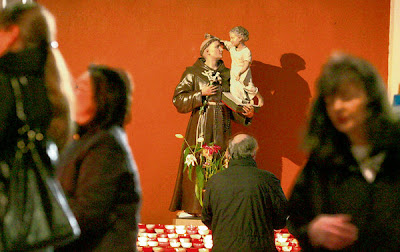 PRAYERS WERE said for the victims of child sexual abuse at the Pro-Cathedral in Dublin yesterday.

Priests asked Mass-goers to pray for God’s blessing for all those who were hurt by priests of the diocese and especially those whose wounds were re-opened by the report of the Commission of Investigation into the Archdiocese of Dublin.

A large congregation attended lunchtime Mass at St Mary’s Pro-Cathedral on Marlborough Street, one of a number of services at which prayers for victims were said.

One of the priests who was identified in the report but, for legal reasons, couldn’t be named had been based at the Pro-Cathedral in the 1970s.

Outside parishioners spoke of their disappointment, sadness and anger. Mass-goer Vincent Tierney said he was stunned by what had happened. “I can’t put it into words. There is good and bad in all of society; we are all sinners, but those men were professionals, they had seven years’ training in college. If they showed any slight degree of anything they should have been taken out of it. I can’t understand how they got that far.”

Phil Rodgers said she felt very sad when she heard the news. “Of course we are all human. But I think now people will be more aware of what’s happening with the children.”

There was also some sympathy for ordinary priests. “I feel very sorry for all the wonderful priests. It’s hard to believe it could have happened.”

Joseph Clarke, who was himself abused as a child though not by a priest, said if the report had not come out the abuse would have continued. “It damaged me inside and mentally, I turned to drugs and drink because of it. I was in and out of prison. We have to find a way to forgive. We have to forgive, but we never forget.”

George Crowther said he had known one of the abusers when he worked in the East Wall area of Dublin. “He was a lovely man, very quiet. I couldn’t believe it when I heard what he’d done. It was a dreadful business.”

Mr Crowther said he blamed the four archbishops criticised by the report, as well as former auxiliary bishop James Kavanagh.

Some children of Donnycarney parish, on Dublin’s north side, were victims of abuser Fr Thomas Naughton and a second abuser who has not yet been named.

Mass there was quiet yesterday morning, with the congregation chiefly made up of retired people. Though willing to talk, they were reluctant to be identified.

One woman, who was 54 years in the parish, said it was hard to believe the priests did what they did and then said Mass.

“We were baring our souls to them in confession. I’m angry about it and disappointed too. We put them on a pedestal, the priests, they had the grace. If it was a layman I don’t think I’d be so angry.”

A man said he felt anger and disgust when he heard the news, “not only at the priests”. “Bishop Murray down in Limerick is still in denial, that’s the message I’m getting,” he said.

A woman in her 70s was angry about the control the church had over married life.

We put our trust in the clergy. They looked down their noses at us.
They made us feel less than welcome and less than worthy.
Before things can change, the ones that remain in office with questionable pasts have to go.