Victims tell of horrific abuse as helplines are swamped 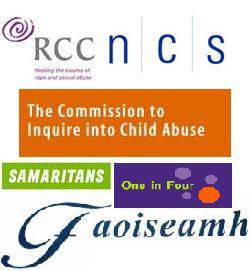 VICTIMS of clerical sex abuse spoke of their horrific ordeals yesterday as support groups revealed a 300pc increase in calls to their helplines.

The agencies are combining their efforts to cope with the soaring demand for their services and received around 1,000 calls in the 24 hours following Thursday's publication of the Murphy report.

The Dublin Rape Crisis Centre (DRCC) said they had received around 260 calls, One in Four reported around 180, the HSE's National Counselling Service said almost 300 and Faoiseamh said almost 200.

The Samaritans, who are not part of the collaboration effort, said they had also received an increase but would not have a figure until next week.

Chief executive of the DRCC, Ellen O'Malley-Dunlop, said they opted for a multi-agency response "so that the victims could have the best possible supports".

A HSE spokeswoman said the nature of the calls had changed yesterday with a huge increase in victims requesting face-to-face counselling.

This came as clerical abuse survivors relived their horrific experiences on radio stations and forums around the country.

Much of the testimony centred on one of the most prolific abusers, Fr James McNamee, and victims told how he would take them to his home and violate them in a swimming pool in his back garden.

McNamee, who served in the parishes of Crumlin and Delgany, Co Wicklow, was described as an arrogant man who was "pure evil".

One man, who gave his name as Richard, said he had suffered abuse at the hands of McNamee in Crumlin during the mid-1970s.

"He swam naked and everybody else was in the nude," Richard said.

"He would get you out of the pool and he'd dry you down but he didn't dry you like your father would."

Richard was aged seven or eight at the time of the abuse.

Another of McNamee's victims, Paul, said his life had been destroyed by the paedophile priest.

"I had a horrendous time. I actually dropped out of school," Paul said. "I was brought to a football ground in Fairview where there were baths and it started there.

"It went on then to his house in Crumlin and then it went on to my house. At the time I was a very bad asthmatic and he would come to the house and it was just horrendous. My mother would be downstairs."

McNamee never saw the inside of a courtroom for his crimes after the DPP ruled that too much time had elapsed for a successful prosecution to be taken.