Kennedy to speak on health care after church feud 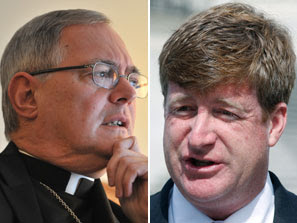 Congressman Patrick Kennedy is to make his first public appearance since heightening a feud with Rhode Island's Roman Catholic bishop over abortion.

The Democratic lawmaker plans to speak Monday at Brown University about the politics of health care reform, a subject that set off his feud with Bishop Thomas Tobin.

The men have clashed for weeks over publicly financed abortion in legislation overhauling the nation's health care system.

A week ago, Kennedy told The Providence Journal that Tobin banned him from receiving Holy Communion because of his support for abortion rights. He didn't explain when Tobin issued those instructions.