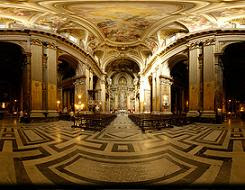 From November 29th to December 7th a novena dedicated to the Immaculate Mother will be led by nine cardinals in Rome.

The tradition has a long history at the Basilica dei Santi XII Apostoli.

The nine days of prayer will be observed in the Roman Basilica dei Santi XII Apostoli (The Holy Twelve Apostles), with each of the nine cardinals officiating ceremonies on separate days.

For the sake of continuity, the homily is given by same person for the entirety of the novena.

This year, Monsignor Stefano De Fiores from the Marian Theological Faculty will be the homilist.

According to today's news release from Italy's Religious Information Services, this practice of Marian devotion has been observed in this church since the 15th Century.

The tradition of celebrating the 8th of December in veneration of the Immaculate Conception was introduced to the Basilica by Franciscans in the mid-1400's and later, by order of Pope Sixtus IV, they were given official license to observe the date 'with great solemnity.'

The tradition of the novena grew from there.