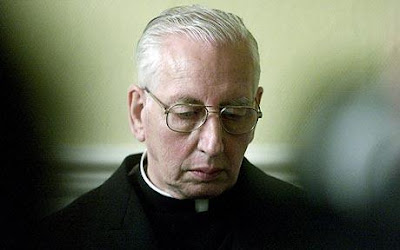 Ireland's Roman Catholic archbishops and police covered up four decades of child sex abuse by priests in a conspiracy to protect the reputation of the church, a report found.

Clergy were able to molest hundreds of vulnerable children because of a "systemic, calculated perversion of power" that put their abusers above the law, the Irish government said.

The damning verdict on the conduct of church and secular authorities followed a three-year investigation into allegations of child abuse by priests in Dublin going back to the 1960s.

Investigators who were given access to 60,000 previous secret church files accused four Archbishops of Dublin of deliberately suppressing evidence of "widespread" abuse.

Archbishops John Charles McQuaid, Dermot Ryan and Kevin McNamara, who have all since died, and Cardinal Desmond Connell, who is retired, all refused to pass information to local police, the report said.

Evidence was kept inside a secret vault in the archbishop's Dublin residence, with suspect clerics moved between parishes to prevent the allegations being made public.

Last night the current Archbishop of Dublin, Diarmuid Martin, apologised to the victims, describing their abuse as an "offence to God". He said: "I offer to each and every survivor my apology, my sorrow and my shame for what happened."

In a 750-page report published yesterday the Commission to Inquire into the Dublin Archdiocese blamed the church's "don't ask, don't tell" approach for perpetuating abuse.

"The Commission has no doubt that clerical child sexual abuse was covered up by the Archdiocese of Dublin and other Church authorities," it said.

"The structures and rules of the Catholic Church facilitated that cover-up.

"The State authorities facilitated that cover-up by not fulfilling their responsibilities to ensure that the law was applied equally to all and allowing the Church institutions to be beyond the reach of the normal law enforcement processes."

The inquiry, headed by Judge Yvonne Murphy, dismissed the claims of former bishops that they did not know sex abuse was a crime.

It concluded that the the church hierarchy was preoccupied with "the avoidance of scandal, the protection of the reputation of the Church, and the preservation of its assets".

It added: "All other considerations, including the welfare of children and justice for victims, were subordinated to these priorities."

The commission looked at a sample study of allegations made by 320 children against 46 priests between 1975 and 2004. One priest admitted to sexually abusing over 100 children, while another accepted that he had abused on a fortnightly basis over 25 years.

Two of the priests featured in the report have their names blacked out so not to undermine ongoing criminal actions.

Dermot Ahern, the Irish justice minister, said that the Gardai would review its procedures for dealing with sexual abuse complaints, and promised to continue to pursue the perpetrators.

"The report catalogues evil after evil committed in the name of what was perversely seen as the greater good," he said.

"There is no escaping the cruel irony that the church, partly motivated by a desire to avoid scandal, in fact created a scandal on an astonishing scale."

Victims called for senior Catholics and police officers to face criminal charges over the cover-up, and for the inquiry to be expanded to cover every Irish archdiocese.

"Those who turn a blind eye to these offences are as much a part of the problem as those who actually commit them," said Andrew Madden, who helped blow the whistle on the abuse 10 years ago.

The publication of the report, which was submitted to the Irish government in July, is expected to prompt a wave of new child abuse allegations against Catholic priests.

On Wednesday the Christian Brothers religious order announced it had set aside £145 million to compensate children who had been abused in its schools in orphanages in Ireland.