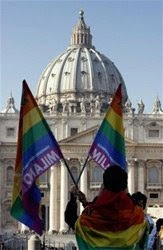 Gay rights groups and newspaper editorials on Tuesday condemned the Vatican for its decision to oppose a proposed U.N. resolution calling on governments worldwide to de-criminalize homosexuality.

The row erupted after the Vatican's permanent observer to the United Nations told a French Catholic news agency the Holy See would oppose the resolution, which France is due to propose later this month on behalf of the 27-member European Union.

Archbishop Celestino Migliore said the Vatican opposed the resolution because it would "add new categories of those protected from discrimination" and could lead to reverse discrimination against traditional heterosexual marriage.

"If adopted, they would create new and implacable discriminations," Migliore said. "For example, states which do not recognize same-sex unions as 'matrimony' will be pilloried and made an object of pressure," Migliore said.

Pointing out that homosexuality was still punishable by death in some Islamic countries, the editorial said what the Vatican really feared was a "chain reaction in favor of legally recognized homosexual unions in countries, like Italy, where there is currently no legislation."

"The French resolution, which is supported by all 27 members of the European Union, has nothing to do with gay marriage. It is about stopping jail and the death penalty for homosexuals," Grillini told Reuters.

The resolution is to be presented by Rama Yade, France's state secretary for human rights. On Tuesday the Paris government defended the resolution.

"France's initiative ... is an initiative that is based on existing texts. The idea is not to create new rights. The idea is ... to make decriminalization possible," French Foreign Ministry spokesman Eric Chevallier said.

Human rights groups say homosexuality is still punishable by law in more than 85 countries and by death in a number of them, including Afghanistan, Iran, Saudi Arabia, Sudan and Yemen.

Vatican spokesman Rev Federico Lombardi said "no one wants the death penalty or jail or fines for homosexuals" but defended Migliore's comments, adding that the Vatican was in the majority on the issue.

"It's not for nothing that fewer than 50 member states of the United Nations have adhered to the proposal in question while more than 150 have not adhered. The Holy See is not alone," Lombardi said.

Grillini, the gay rights activist, said he feared what he called another "Holy Alliance" between the Vatican and Islamic states at the United Nations to oppose the proposed resolution.

At a major U.N. conference on the family in Cairo in 1994, the Vatican teamed up with Islamic and Latin American countries to defeat an abortion rights proposal.