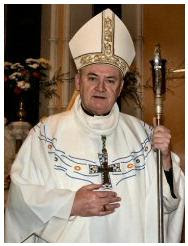 People suspect there are dioceses around the country where bishops still practise, "whatever you say, say nothing".

It makes for profoundly depressing reading.

Has nothing been learnt?

The report states bluntly that "any references to the need to protect vulnerable young people and to act in a timely and effective way to achieve this end" were "glaringly absent". Instead, the welfare of the priests seems to have been the priority.

Mind you, at least one of the priests (Fr A) is not happy with how he was treated, either. "His legal representative has raised as an issue with the diocese their failure to caution A about making an immediate response to the allegations when these were put to him by the bishop."

Of course, the allegations have not been properly investigated, and there is no judgment as to their veracity. Some may turn out to be false allegations. While no one would wish to see an innocent person suffer, that is not the point.

The bishops agreed to a stringent set of guidelines regarding allegations of sexual abuse. These include liaison with the appropriate agencies, including the gardaí, in a timely manner.

One sentence jumped out at me from the Cloyne report. "[Fr] B was a career guidance teacher in a local convent school."

Career guidance teachers are subject to a very strict code of ethics, because their position allows them access to young people at very vulnerable moments. The idea that anyone would abuse such a position is horrific, and doubly horrific if the abuser is a priest.

The first complaint about Fr B was in early 1995. It took three further complaints before, in February 1998, Bishop Magee sent the priest a letter.

"Pending the pastoral decision which I may eventually take in your regard, I require you do not engage in the visitation of schools or have young people under the age of 18 alone in your house."

However, Fr B was still allowed to continue in other parts of his ministry. It was only in 2003, after further complaints that the matter was reported to the Garda. This priest must have had access to hundreds, if not thousands, of pupils. The final complaint on record against him alleges that he raped a girl of 13 and continued to abuse her until she was 18. Other allegations include that he abused a girl while hearing her confession on retreat.

It makes me despair.

There is a veritable tsunami about to hit the church in the new year.

The Ryan report on abuse in residential institutions is due for publication, as is a report on the Dublin archdiocese.

Both will be harrowing.

And no one responsible will be saved by "abuse fatigue".

The public will demand answers. At least the Dublin archdiocese appears to have been exemplary in its co-operation.

The only hope lay in being able to say "Yes, all of this happened, but it is now in the past. We do things differently now."

The report on the Cloyne diocese means it is not possible to assert that this is the case in every diocese.

It could have all been so different. In 2002, at the height of another crisis, I was asked to speak to the bishops.

Yes, they probably should have asked an abuse survivor, but for whatever unfathomable reason, I was asked to speak along with some others. I took it as an opportunity to present a simple message on behalf of all the utterly bewildered Catholics out there who could only see one way forward.

Get all your dirty linen out there yourselves, and do it quickly.

Don't have the truth dragged out of you over years.

Produce your own reports, chaired by credible people.

It will hurt like hell, but not until people are assured that all the ugly truth has been revealed, will there be the remotest chance of beginning to rebuild any kind of credibility.

It doesn't matter that I was the one making the appeal. I was only echoing what every lay Catholic whom I knew would have said. In truth, one of the other people to address the bishops was a priest, and he said exactly the same thing. If only that appeal had been heeded, the worst would be over by now.

Instead, the church continues to haemorrhage. People can get their heads around, just about, the reality of evil, including the evil of child abuse. They may be appalled and sickened, but they know that human nature is capable of just about any kind of depravity.

What they cannot cope with the idea that people in authority will fudge, and evade, and continue to place vulnerable children in danger. Perhaps a solitary sign of hope is that this hard-hitting report was produced by a body financed by the church but independent of it.

Yet Ian Elliot, CEO of the NBSC, only came to know of these allegations through, in one case, a complaint to the office of the Minister for Children, and in another, a referral from a helpline funded by religious orders. He did not learn of them through information furnished by the diocese of Cloyne, although they did eventually co-operate with the investigation.

How many more cases are there out there?

How is Ian Elliot to do his job with any kind of credibility without full co-operation?

Because of what has happened in Cloyne, people will suspect that there are dioceses all around the country where bishops are still practising, "whatever you say, say nothing".

It is probably unfair to many bishops, but how do we know? Well, if they had published their own audits, using independent people, we would have some idea.

Resignations will only achieve anything if all the other bishops get the message that times have truly changed.

The resignation of Bishop Comiskey opened the way for Bishop Eamonn Walsh to take action in Ferns.