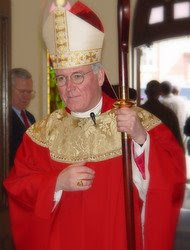 The leader of Maine's Roman Catholics has taken the unusual step of threatening to punish an outspoken advocate for people who were sexually abused by priests, possibly by denying him communion.

Paul Kendrick of Freeport has been banned from the Cathedral of the Immaculate Conception in Portland, and warned in a letter that if he tries again to contact Portland Bishop Richard Malone he risks losing any right "to participate fully in the sacramental life of the church."

Kendrick, a co-founder of the Maine chapter of the lay reform group Voice of the Faithful, has been a vocal critic of how church leaders have responded to abuse claims and treated victims.

"It's a not-so-subtle attempt to silence me," Kendrick said Monday.

"My response is that it's not about me. It's about protecting children today and helping and supporting those who were abused. He will not silence me from speaking out on those issues."

Sue Bernard, a spokeswoman for the Diocese of Portland, said the bishop doesn't object to criticism but that Kendrick's actions have gone far beyond that.

Kendrick has protested outside churches, inundated the diocese with mail and e-mail, participated in a public confrontation with Malone and even showed up at an out-of-state meeting the bishop attended, Bernard said. She called it a campaign of harassment that ultimately could undermine Malone's ministry.

"For five years, we've really looked the other way. The bishop let him have free rein basically but we want him to know that from this point on, he must stop," she said.

Kendrick got word of the potential penalty after he told the bishop in a letter that he planned to attend Christmas Eve Mass at the Cathedral of the Immaculate Conception, where Malone often celebrates Mass. The activist then received a criminal trespass order that barred him from the cathedral, the chancery and Malone's residence. He was also served an order to cease and desist from harassing Malone.

The vicar general, the Rev. Andrew Dubois, further warned Kendrick in a letter of church-imposed penalties if he fails to abide by terms of a church order forbidding Kendrick from coming within 500 feet of the bishop or being in the same building when he's present.

Nicholas Cafardi, a canon lawyer and former dean of Duquesne Law School, said he had never heard of a bishop using church law, in this case the threat of an "interdict," against activists.

"It's extremely unusual," said Cafardi, who was an original member of the National Review Board, the lay panel the U.S. bishops created in 2001 to monitor their response to the abuse scandal.

The Rev. Tom Doyle, a Virginia priest and advocate for victims who is representing Kendrick, said the church has threatened to prevent Kendrick from receiving Holy Communion if he doesn't comply.

Doyle said he can't find any basis for the diocese's actions, but he said church leaders have been angered by the aggressive tactics of some activists. Doyle said his work with abuse victims cost him a promising career as a canon lawyer in the church.

"One of the biggest sins in the Catholic Church is to criticize a bishop," Doyle said.

The Church does not like criticism of one of its own even if it is justified.

If this poor man says "One of the biggest sins in the Catholic Church is to criticize a bishop," I have gone one better I have ctiticised an Archbishop - deservedly too when correspondence is ignored and a personal conversation was cut like a knife slicing through the air!!! I have personally witnessed the higher the ranks within the Church the worse the arrogance of the Clergy.

Other things are also familiar to me as not being allowed to participate in Church events or even Communion. (I have only suffered the first presently!)

Had the instructions of the man the Church, Parish Priest, their legal team and Parish been followed through on, aftrer the writtien recommendation of this man they CHOOSE, PAID AND INSTRUCTED with a briefing to write his now famous report, this soul here would have for no reason other than to shut her up on her mistreatment by a Parish Priest and about the goings on in her local Parish, have been barred from the Parish Centre and Church by way of a Barring Order applied for by the Church and a Protection Order not to go near the Parish Priest!!!!!! Does a former employee suddenly turn into a terrorist that such instructions are given to the Parish by this expert??????? In addition to that he also requested that this soul would be indisposed for the long term forseeable future by force.

Had they followed through on this man's bought advice they would now be paying out a multi million Euro law suit for damages all to hide what goes on in a Parish. Does that not prove the Parish has a LOT to hide???????????????

This soul knows she is not wanted in the local Church or in anything to do with it but the Constitution states we can attend our religious services in our Churches so if the Parish wanted some real hard hitting front page publicity they could have gone ahead with the man's instructions and things would not have dragged on for years, all the skeletons would have been long rattled out of the closet by now and the truth would be out.

I sympathise with the member of the Clergy in USA who also finds himself on the receiving end of bully tactics when he is standing up for rights of others and justice as I am. It does not matter if the abuse is sexual, psychological or otherwise it is still ABUSE.
Good luck to him succeeding. Kindred Spirits.

FIVE YEARS of constant email, post and barrage of verbal confrontation is beyond the bounds of civility. The behavior is clearly harassment with malicious intent.

Most of us would look for any legal means possible to end this kind of excessive behavior were it to come from a nagging neighbor or inlaw!

I'm delighted to see that when the church has run out of cheeks to turn after FIVE YEARS, someone finally has the cohones to say "Enough!"

The bottom line Rob is that the Church can get away with anything because of their power connections and money.

If it was another organisation the constant letters, emails or whatever would have brought about a change in the situation to perhaps at least try to rectify the wrongs of the Church. But the Church does not even have to try to rectify their wrongs or listen to the wronged because they know at the end of the day their money, power and legal teams will get them out of whatever the next scrape happens to be for their members of the Clergy and so on and on the various kinds of abuse and corruption within the Church will go.

If more of those who have been wronged stood up to the powers that be within the Church it may be a far humbler organisation today.