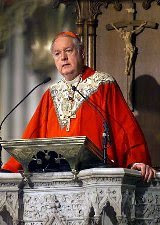 More than 15 infants, held by their mothers, glanced quietly around the room. Some of the older toddlers played with Christmas bells or chatted playfully with the other children.

Cardinal Edward Egan, archbishop of the Roman Catholic archdiocese of New York, entered the room with gifts in hand. He was greeted with Christmas carols and a crowd of excited immigrant children, for each of whom there would be a gift for Christmas this year.

The event, held at St. Rita’s Immigration Center in the Bronx, just behind the St. Nicholas Church on Dec. 23, was just one of many charity events taking place throughout the United States. It was also a reminder that regardless of the financial situation, community and family will always be there.

“These are very difficult economic times, and everybody knows that. But working together with faith, with love, we can work together and we’ll be able to overcome these hard times,” said Joseph Zwilling, director of communications for the archdiocese.

The immigration center acts as one of the cornerstones for the local community as well as one of the few places where immigrants and struggling mothers can turn to for help. The center serves more than 2,500 children and adults each year. While the children are playing in the daycare centers, the mothers are often in the next room taking English classes, getting assistance in attaining U.S. citizenship, or finding help in a search for employment.

Egan expressed his hope that the economic challenges ahead will only help to bring people closer together.

“I believe that we’re a nation that went crazy,” he said. “We bought all sorts of things we didn’t need and frankly, we didn’t even want, and maybe we’re going to move from some of that and realize that there are some other things in life that are far more important.”

Looking back on the Great Depression, the only time in U.S. history that can compare to some of the hardships the country and the world are facing, The cardinal, who is nearing his 77th birthday, said that even then, there were “heroes” who made a difference.

“I remember my grandfather on my mother’s side telling about two grocers who virtually fed the poor of the neighborhood by saying, ‘Well, Ms. Whoever, I’ll put that on the bill,’” said Egan.

He also shared of doctors who would come to see their patients in their homes, as they did “in the good-old-days,” and when asked how much the cost was, they would answer, “whatever you can handle.”

In the church schools, parents would give their children $5 a semester to pay for their education. They would then be given a “holy card” with a picture on it as a receipt. The cardinal shared that there was also a nun who, in the height of the depression, “used to give the prettiest holy cards to the children whose envelopes had nothing in it.”

“I think that kind of heroism is going to be needed during this period. We’re going to have a year or more in which we’re all going to have to get together and solve the problems,” said Egan.

Making reference to the financial bailouts of banks and giving money to businesses, Egan shared that “that’s all fine. But at the same time, we’ve got to have that quiet heroism. Like the grocery store that put it all on the cuff.”

“That’s what I’m hoping for this Christmas. That this Christmas be a time when people look into the crutch and they see a young man who couldn’t get shelter for his wife and his child, a woman who had to put the child to sleep in a troth in which animals eat. What would we do for them? What would we do for our brothers and sisters who are hurting here in New York, Greater New York, and the nation?”

Despite this, a quiet concern has fallen over many as the financial crisis has begun to loom overhead. Businesses, schools, and churches alike have begun to feel its pressure, yet Egan said that although there might be some impact on the churches and centers, he sees it as being very minor.

“We might have more attendance in churches than we’ve had in a while,” he said.

Unfortunately, schools might be another issue as parents struggling financially may not be able to afford the tuition. Cardinal Egan shared that he will do all he can to lessen the losses. “I’m going to say here that I’m going to do everything in my power not to lose one child. In fact, my aim is to increase the enrollment in a time in which we are all being tried very hard.”

“Until this year, we’ve increased enrollment every year that I’ve been here. We can’t this year and we know we can’t because the economy is what it is,” Egan said. “We do everything we can to keep the cost down so that we can keep the enrollment up.”

“Many of these parents cannot afford, say they are paying maybe a thousand dollars,” he said. “If you’re on the brink of bankruptcy, if you’re going to lose your home, you lost your job, a thousand dollars is like a million to other people. So when it comes time to pay the tuition they say they can’t do it.”