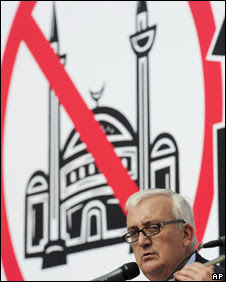 Right-wing politicians have protested at the inclusion of Islamic symbols in nativity scenes in northern Italy.

Elaborate cribs with figurines enacting the nativity decorate most Catholic churches in Italy at this time of year.

A priest at a Genoa church put a mosque and minaret in his crib, while a crib at a Venice school also had a mosque.

The Genoa branch of the anti-immigrant Northern League reacted with fury. But a senior church figure said there are no firm rules on what can be included.

At Our Lady of Divine Providence in Genoa, Father Prospero Bonanzi put a mosque and a minaret in his crib.

"The act of a fool," the local branch of the party called the priest's decision.

"The only thing he missed out was the suicide bomber ready to blow up Christ's manger," was the comment of the Northern League's European deputy Mario Borghezio.

In one Catholic school in Venice the mosque placed in the middle of a Christmas crib produced mixed reactions among pupils and teachers.

But Cardinal Angelo Scola, the Patriarch of Venice, was more cautious in his comment.

There are no rigid rules about what you can and cannot include in the nativity scene, he said.

The imam of Milan, Hamid Shari, said he thought the inclusion of the mosque was a good idea and a gesture of inclusivity.

Italians love to adapt new forms to ancient traditions and there is a new family in many of the Christmas cribs produced in Naples.