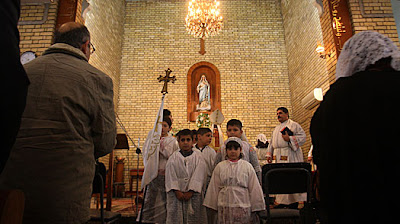 The Catholic Church of Mar Yousif is modest and unassuming from the outside.

On Christmas morning, a maze of cars obstructed the street in front, presenting a hundred-foot long physical barrier to any would-be car bomber.

The faithful have learned to be cautious: their church is nestled in the Mansur district of Baghdad that was formerly home to some of the city's worst insurgent activity.

But the war seems almost distant once you get past the church doors. Inside, chandeliers from high ceilings illuminated a Christmas morning with nearly a thousand Iraqi Catholics filling row after row of packed pews — more than the building has seen in years.

This year marks the first time in Iraq that Christmas is an official national holiday. Congregants at Mar Yousif (St. Joseph's) said they felt hopeful about the future, and many spoke earnestly about their optimism for the country, now enjoying the lowest level of violence since 2003. But others noted that even as conditions in Baghdad improve, Iraq's persecuted Christian minority continues to stream out of the country.

At Mar Yousif's service on Christmas morning, the head priest, Pios Cacha, who has seen his congregation dwindle from 1,200 families to 650 since the U.S. invasion, led a sermon that was straightforward: Iraqi Christians should come back to Iraq and start rebuilding their broken country, and their community.

"Why are we afraid? We should not be afraid of the terrorists. When we were born, we were free," thundered Cacha from a red carpeted stage. He urged his congregation to embrace friendship, brotherhood, and open minds. "We need to teach the new generation how to live," he said.

Sectarian violence in the five-and-a-half years since the invasion has forced hundreds of thousands of Iraqi Christians to flee the country, many of them to neighboring Syria and Jordan. Mansur, the predominantly Sunni district that houses Mar Yousif, was a dangerous insurgent stronghold until one year ago.

And in the northern Iraqi city of Mosul, where many of the Syriac Catholic congregants hail from, the persecution continues. In February, the head of the Chaldean Catholic Church in Mosul, Archbishop Paulos Faraj Rahho, was kidnapped and murdered. Over a dozen others were killed this fall in direct religious targeting.

"People are still thinking about leaving. From their point of view, things are still bad, like in education and health," says Maha Selma, who sat in the front row of Mar Yousif with her elderly parents. "Those who leave don't come back."

On Christmas morning, Monsignor Pios Cacha led a service in which Arabic hymns mingled with long, chanted prayers in Aramaic, and even a few tunes in English from the young mixed gender choir.

"I'm asking all the Christian brothers to come back and rebuild the new Iraq," he told his audience, adding that he had stayed through the worst years of the violence, during which he took on the leadership of two additional churches whose priests had fled. After the service, others in the congregation echoed his pride.

"My sister and her family are in America now as humanitarian refugees in Chicago. But they feel like strangers there, and they miss this atmosphere," says Ghassan Khudher, a pediatrician who has attended Mar Yousif on Christmas for the past 10 years.

"Here there is still fear for our families and our children.," he says to me. "But I don't like being outside [Iraq], because your country is not like Iraq."

As the service wound to a close around noon, families swarmed across the red carpets to receive communion from white-robed priests. One cleric later donned a Santa mask and hat to pass out toy trucks and pink purses to a crowd of screaming children.

As the congregants headed home, a car bomb exploded in Shula, a predominantly Shi'ite neighborhood northwest of Mansur, the AP reported.