Priest in child abuse protest urges bishop to step down 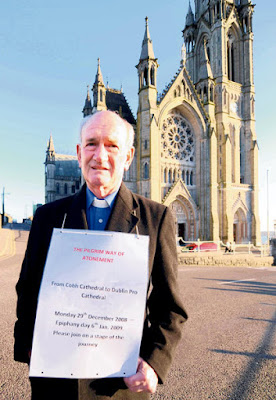 A PRIEST who is walking from Cork to Dublin to show solidarity with victims of clerical sex abuse has met Bishop John Magee of Cloyne diocese.

Bishop Magee has been severely criticised over recent weeks following a report on the mishandling of allegations relating to clerical sex abuse in his diocese.

Fr Michael Mernagh (70), who yesterday said he believed Bishop Magee should step down from his post, also maintained a three-day vigil outside St Colman's Cathedral in Cobh over Christmas in protest at the Cloyne revelations.

The Dublin Rape Crisis Centre has also added its voice to calls for Bishop Magee's resignation.

She was not surprised he had not resigned, but "our culture has changed. We now have national guidelines for the protection and welfare of children, Children First, but he definitely did not put children first" and he should stand down.

Fr Mernagh said he had the meeting with Bishop Magee after a concerned member of the clergy came outside to talk to him on Christmas Eve and invited him in to speak to the bishop.

Fr Mernagh said he had had an informal chat with the bishop in which he outlined his concerns.

"I explained what I was about and my purpose in being there. I think he took that on board. I wasn't there to confront him. I said the reason I was doing it was because I had a responsibility as a priest to atone for what had happened and to be in solidarity with the victims of abuse in all dioceses, not just in Cloyne.

"I was straight out with it. I didn't feel uncomfortable. We talked a bit. It wasn't a long conversation as he was just off the altar. It was cordial."

Fr Mernagh said he told Bishop Magee that his walk wasn't just about Cloyne but the whole church.

The Dublin-based Augustinian priest said he was treated with respect by the bishop and his secretary even though they were "under a lot of stress".

Meanwhile, Fr Jim Killeen, director of communications in the diocese of Cloyne, yesterday refused to comment on rumours that Bishop Magee may have travelled to Rome in recent days.

Fr Killeen said no further statements would be issued on the Cloyne report. Sources however, have indicated that Dr Magee is still in Cobh and has no plans to travel.

Bishop Magee sought to defuse the child protection controversy through a special Christmas message in which he personally accepted responsibility.

At Christmas Eve Mass in Cobh, Dr Magee said he took full responsibility for the "errors" made in relation to the management of child sexual abuse claims in the diocese.