The Pope's comments: Why we should be worried (Contribution) 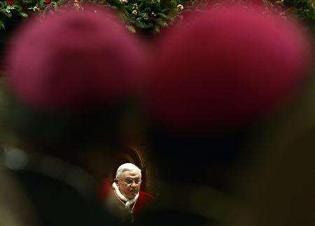 Saving humanity from homosexual acts is as important as saving the rainforests, suggested Pope Benedict in his Christmas message.

Gay Aucklander Richard Howard believes the Pontiff's words are a serious assault on our communities… Of all the profoundly painful and serious issues facing the world right now I was blown out that homosexuality was chosen as a focus by the Pontiff in his Christmas message and inter-twined in a weird concept of world ecology.

My concern is that I well understand that his message directly bolsters the bigots and leads directlyin some cases to extreme prejudice, exclusion, violence, death. Whether we like it or not this bloke has a big following and the ear of many. "God" is seen to be on the side of queer bashers and they take his word as their cue for action.

With 6,000,000,000 people now on the planet; a 2 billion increase in my short life time alone (despite me being a big homo) the argument of homosexuality under-mining family values and unbalancing the ecology just doesn't make sense. One could take the view that more homos = less children = less impact on the environment (he chuckles).

One could say that the population numbers speak volumes about the degree to which families are undermined by homosexual preferences. One could equally say that homosexual people are major and marvelous contributors to the creativity, peace and prosperity of the world. Of course then there is the fact that unless a person chooses to engage in homosexual activity then it is unlikely to affect them physically in any way. This all leads me to wonder why homosexuality is an issue to anyone other than those who have the inclination to participate.

The broad picture for me here is that the Vatican, the Catholic church, have had a long history of actively denying how and who human beings are in their essence and in their natural expressions. It has never been an instrument to promote spiritual practice and expansion, quite the opposite in fact, its nature has been to control, oppress personal expression and power and suppress truth. It hashad a long history of manipulation, punishment and slaughter inspired by dodgy ideas and highly edited documents with suspect providence. The evidence for this is undeniable when you start to delve as I have done.

Remember this is the organisation that vehemently denied that the Earth moved around the Sun. It still upholds that women are beings originating from man; when in fact we know that biologically the opposite is true. We know that the doctrines and dogma are upheld even when they are blatantly not true and proved to be not true. Countless people have been steered in the wrong direction and suffered severely across the centuries because of this dogmatic position.

The point is that in reality the Vatican is perhaps the least morally equipped body on the face of the planet to dish out spiritual, or practical guidance to people who already have an innate understanding of what it means to be human. It is a morally bankrupt organisation, an organ of the worshippers of power, control and extreme wealth. In fact,there is more fellowship, heart and soul and relevant wisdom in a bawdy, drunken night at the pub!

The recent stand against homosexuality is probably more to do with damage control in relation to those lonely, fiddling, randy priests within the church who have cost the organisation more than a billion dollars in law-suits over recent years and further under-mined the integrity of an already dodgy system.

So on one hand I can easily say that what the Vatican thinks and proclaims is totally irrelevant to me; the squawkings of a bunch of dusty old wax works characters.On the other hand the Vatican have an undeniable, broad, deep foundation of power and a loud voice which when used unwisely can have a very negative, real effect. Fortunately this is often tempered by the more pragmatic attitudes of local clergy (depending on their take on any issue) in relation to the actual people they are relating to on a day to day basis. Of course the opposite can be true and the papal dictates can be amplified locally as well.

Overall my thinking is that this latest Papal declaration of position against homosexuality is a serious assault on our reality, our rights, our sense of security and well-being and that a planned, direct dialogue with church and government leaders, as well as statements to the press, is essential and may do something to subdue the effects of what in reality amounts to outrageous Vatican propaganda.