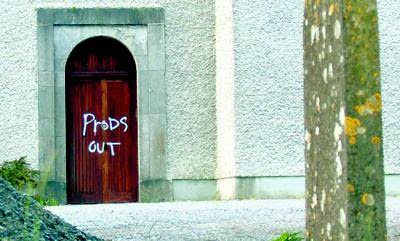 A PROTESTANT clergyman has described vandals who attacked his church as "idiots" and "detestable and filthy vermin".

And he called for the "birch" to be administered to those targeting his church in the east Donegal village of Newtowncunningham.

Reverend Canon David WT Crooks was speaking after the latest attack on All Saints Church.

When Rev Crooks arrived at the church for the 8.30am service on Christmas morning, he was horrified to discover that vandals had wrenched the doors off the lychgate and thrown them over a hedge.

The lychgate, erected in 1920, is a feature of the church and indeed of the village itself. Though these are common in England, there are said to be only four or five in Ireland.

If apprehended, Rev Crooks said the culprits should "get a birch where it hurts". He also called on the relevant authorities to turn prisons in to military regimes and not the "holiday camps" that they are at present.

Back in May, vandals smashed their way in through a rear door of a vestry room at the church and a safe was removed.

The safe contained an amount of liturgical silverware of historical importance to the church, some dating from 1725.

A furious Rev Crooks now wants the culprits to feel the full force of the law for their "reckless and senseless vandalism".

"The people who commit these acts of vandalism are absolute and complete idiots," Rev Crooks said.

My apology on behalf of the perpetrator has little meaning, but it is sincere.