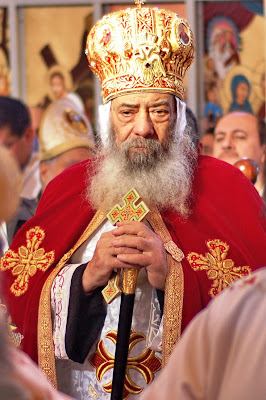 Egypt's Coptic pope has banned the faithful from confessing their sins to priests over the telephone because intelligence agents might be listening in, a newspaper reported on Friday.

"Confessions over the telephone are forbidden, because there is a chance the telephones are monitored and the confessions will reach state security," the independent Al-Masri Al-Yom quoted Pope Shenuda III as saying.

The leader of the Coptic minority also said confessions over the Internet were invalid because they might be read by websurfers.

"A confession over the Internet does not count as a confession, because everybody can look at it and it won't be secret," he said.

The sacrament of confession, also practiced by Roman Catholic and Eastern Orthodox Christians, is normally a very private conversation between penitent and priest.

Priests are strictly bound to respect the privacy of confession, even in the face of threatened punishment, and many countries' legal systems specifically protect the "seal of the confessional."

Coptic Patriarch Anba Morcos told AFP that people have begun to phone in their confessions.

"It's a new thing; it's been happening for the past four or five years," he said.

"The monk is supposed to be secluded from the world. But the mobile phone brings the world to him," he said, adding that monastery administrators were allowed to keep their cell phones.

The Vatican does not recognise confessions by telephone or over the Internet.

Archbishop John Foley, president of the Pontifical Council for Social Communications, has said "confession requires the physical presence of the priest and the penitent.