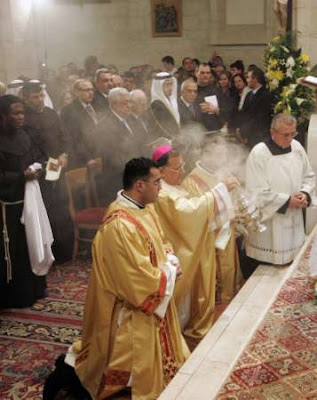 Christians peacefully celebrated Christmas in Bethlehem’s Manger Square at the church that by tradition is the site of the birth of Jesus.

Gathering outside of the Church of the Nativity, one of the largest crowds in recent memory gathered to attend the midnight Mass on December 24 and heard Roman Catholic Patriarch Fouad Twal say that that true security comes from God.

"War does not produce peace, prisons do not guarantee stability. The highest of walls do not assure security," said Twal, the Catholic Church's top Latin-rite prelate in the Holy Land.

"Peace is a gift of God, and only God can give that peace."

Improved security around Bethlehem, including concrete walls and checkpoints has meant improved tourism – vital to those living there.

Safer times mean the Palestinians have counted more than 1 million visitors to Bethlehem in 2008, a rise of more than 20,000 from 2007.

However, Christian inhabitants continue to emigrate from town whose name translated means “House of Bread.” Emigration has cut the town's Christian population to an estimated 35 to 50 percent of its 40,000 people, compared with 90 percent in the 1950s.

In his Christmas Day message delivered at the Vatican, Pope Benedict XVI said "Let us think also of the place named Bethlehem, of the land in which Jesus lived, and which he loved so deeply," said Benedict, who is expected to visit the Holy Land in May.

"Let us pray that peace will be established there, that hatred and violence will cease. Let us pray for mutual understanding, that hearts will be opened, so that borders can be opened."

Even so, rocket and mortar rounds rained down upon the land of Christ’s birth from positions held by Palestinian terrorists. On December 24, some 80 rounds thudded into Israel while scores more were registered on Christmas Day, making a total of over 100 rounds.

Mortar fire reached the passenger crossing at the Israel/Gaza border just as a group of Christians was going through on their way to Bethlehem for Christmas celebrations, according to Israeli Defense Forces spokesmen.

Another rocket exploded south of the coastal city of Ashkelon. Rocket and mortar fire have exacted casualties as well as property damage over the two day barrage, while tens of thousands of Israelis near Gaza have been instructed to stay indoors.

Also, the Lebanese army discovered and disarmed seven Katyusha rockets at the northern border of Israel that had been readied for firing.

Israel left the Gaza strip in 2005 after a 38-year occupation, but still controls its border crossings, blockaded for months in an effort to pressure militants to halt their fire.

Despite the rocket fire, the IDF will open two cargo crossings December 26 to allow vital supplies to enter and in order to prevent a humanitarian crisis.

Egyptian President Hosni Mubarak invited Israeli Foreign Minister Tzipi Livni to Cairo in order to discuss renewing the short-lived truce with Hamas. Apparently casting aside Mubarak’s call for restraint under the strain of rocket attacks, Livni said "Enough is enough," "When there's shooting, there's a response. Any state would react that way."

Defense Minister Ehud Barak who, like Livni is running for Prime Minister in the February 2009 election, said that "whoever harms the citizens and soldiers of Israel will pay a heavy price."

Opposition leader Benjamin Netanyahu, a former premier, is currently leading in the horse-race. He favors tough action against Palestinian militants.

Hamas appears unbowed at the prospect of an invasion of Gaza by Israeli defense forces. In various media reports, Hamas asserts that Egypt has given the green light for an Israeli invasion of Gaza to overthrow the terrorist organization that seized the area in 2007.