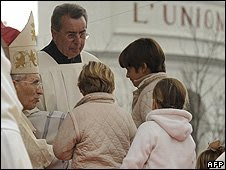 Hundreds of thousands of people have attended an open-air Mass in central Madrid aimed at promoting family values in defiance of some government reforms.

The Archbishop of Madrid used the Mass to condemn abortion.

Archbishop Antonio Maria Rouco Varela , quoted by the AFP news agency, spoke of the "shocking cruelty" of abortion, warning against the "culture of death".

Spain's government is considering easing the country's restrictions on abortion.