Married man to be ordained priest 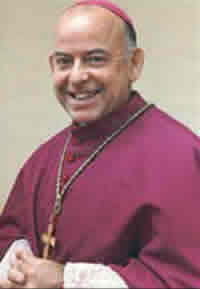 The ceremony will be conducted by Bishop Michael Pfeifer, OMI .

A month later, on Jan. 28 at Sacred Hearth Cathedral Church in San Angelo, Knickerbocker will be ordained a priest for the Catholic Church.

Knickerbocker will be the first married man to be ordained a priest for the Diocese of San Angelo, according to a news release.

In 1993-94, Knickerbocker and his wife, Sandie, became members of the Roman Catholic Church. After review and prayer, Knickerbocker asked to become a Roman Catholic priest in September 2005. Knickerbocker taught church history and Christian spirituality for 32 years on the faculty of the Memphis Theological Seminary, a Cumberland Presbyterian school in Memphis, Tenn.

After becoming a Roman Catholic, Sandie Knickerbocker worked for Catholic Charities, then served on the staff of the seminary in the Doctor of Ministry program .

Knickerbocker's ordination to the diaconate and priesthood is in accord with the 1981 decision by the Holy See to make an exception to the general rule calling only non-married men to priesthood. The "Pastoral Provision," which was established by Pope John Paul II, was adopted especially for use in the United States and has also been extended to England and other countries where bishops have requested special permission to ordain married former Anglican or Episcopalian ministers to the Roman Catholic Church.

Knickerbocker's realization was a long route, starting with his ordination as a Methodist minister in 1966. In 1972, he completed his doctorate in church history at Emory University in Atlanta. In 1973, he began teaching at Memphis Seminary.

Knickerbocker said that it was teaching church history, as well as other factors, that led him to the Episcopal Church and, ultimately, the Catholic Church.

The decision to allow married Episcopalian clergy to serve as priests in the Roman Catholic Church respects not only the decision of their conscience that requires them to profess a fully Catholic faith in the Catholic Church, but also their call to ministry, accepted in good faith, in their tradition that permitted a married priesthood.

In providing this exception to individual married clergymen, the pope and the bishops of the United States wanted to make sure that everyone understood that celibacy remains the normal tradition for priests in the Western Church.

"There is no finer candidate for the diaconate and priesthood than Knick Knickerbocker. I ask God's blessings upon him and his good wife."

Congratulations to Dr. Knick. Having attended Memphis Theological Seminary, it has been a pleasure to know both Dr. Knick and his wife. Prior to his retirement he touched many young and older seminarians as they followed their spiritual journey.

It is nice to know someone who is making history in a positive way!