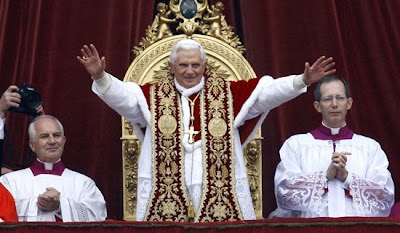 Pope Benedict XVI warned in his Christmas message Thursday that the world was headed toward ruin if selfishness prevails over solidarity during tough economic times for rich and poor nations.

Speaking from the central balcony of St. Peter's Basilica, Benedict said he was trying to inspire hope in the world.

"Brothers and sisters, all you who are listening to my words: This proclamation of hope - the heart of the Christmas message - is meant for all men and women."

The traditional papal Christmas Day message "Urbi et Orbi" - Latin for "to the City and to the World" - usually covers the globe's hot spots, but this year Benedict also addressed the economic conditions worrying many across the planet amid near-daily news of layoffs, failing companies and people losing homes.

Benedict said his Christmas message applied to "wherever an increasingly uncertain future is regarded with apprehension, even in affluent nations."

"In each of these places may the light of Christmas shine forth and encourage all people to do their part in a spirit of authentic solidarity," Benedict said. "If people look only to their own interests, our world will certainly fall apart."

Benedict said he hoped the light of Christmas would radiate to places where "the basics needed for survival are missing."

Wearing a crimson mantle against a damp chill, Benedict told tens of thousands of people in St. Peter's Square that God's saving grace could "alone transform evil into good" and "change human hearts, making them oases of peace."

Benedict dedicated part of his message to Africa, singling out Zimbabwe, where hunger is spreading and deepening. He said that people there were "trapped for too long in a political and social crisis which, sadly, keeps worsening."

International pressure has been mounting for the longtime leader of Zimbabwe, Robert Mugabe, to step down, following disputed elections in March. Millions of Zimbabweans need food aid, and a cholera epidemic has sharpened problems in a country once considered the breadbasket of Africa.

Suffering also continues in the war-ravaged Kivu region of Congo, and in Darfur, Sudan, the pope added. In Somalia, people are weighed down with "interminable sufferings" as "the tragic consequences of the lack of stability and peace," he said.

Benedict spoke of violence and tensions in the Middle East, lamenting that "the horizon seems once again bleak for Israelis and Palestinians."

He denounced what he called the "twisted logic of conflict and violence" and said he hoped dialogue and negotiation would prevail to find "just and lasting solutions to the conflicts troubling the region."

Without naming any particular groups, the pope called for an end to "internecine conflict" dividing ethnic and social groups and disrupting peaceful coexistence. He also denounced terrorism "wherever" it continues to strike.