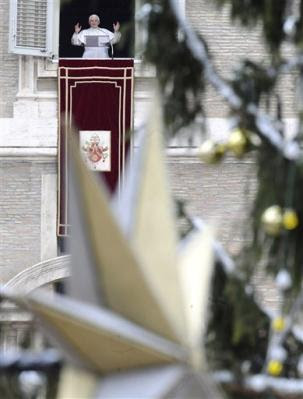 At Friday's Angelus, on the feast of Saint Stephen, the first martyr, Benedict XVI issued an appeal for the liberation of two Italian sisters, kidnapped in northern Kenya on the border with Somalia.

The two sisters, Maria Teresa Olivero and Caterina Giraudo, belong to the contemplative missionary movement "Father de Foucauld" and were kidnapped more than a month and a half ago, together with a group of local collaborators, in the village of El Waq, in northern Kenya.

"I would like," the Pope added, "that in this moment, they should feel the solidarity of the pope and of the entire Church. May the Lord, who in being born gave us the gift of his love, touch the hearts of the kidnappers and grant as soon as possible that these our sisters may be set free, in order to resume their impartial service on behalf of their poorest brothers."

The pope urged "all to pray, without forgetting the many kidnappings of people in other parts of the world, precise news about whom is not always available: I think about the kidnappings for political reasons and other reasons in Latin America, in the Middle East, in Africa. May our prayer in solidarity be in this moment for all of them a source of intimate spiritual help."

A significant part of the reflection before the Marian prayer was dedicated to the figure of St. Stephen, the first martyr, whom the Church celebrates on the day following the Nativity of Jesus Christ. Stephen, a deacon of the Church of Jerusalem, "because of his ardent and courageous preaching was arrested and stoned."

The Acts of the Apostles narrates that his killers "laid down their cloaks at the feet of a young man named Saul" (Acts 7:58). At that time, Paul (whose Hebrew name was Saul) was "a zealous persecutor of the Church."

The pontiff emphasized that "it was precisely the witness of Stephen that was decisive for his conversion."

And he explained that at the moment of his conversion, Paul had a mystical encounter with Jesus, who told him, "I am Jesus, whom you are persecuting" (Acts 9:5).

"Saul," the pope continued, "persecuted the Church, and had also participated in the stoning of Stephen; he had seen him die under the blows from the stones, and above all had seen the way in which Stephen had died: in every way like Christ, meaning that he was praying for and forgiving his killers (Acts 7:59-60). On the road to Damascus, Saul understood that by persecuting the Church, he was persecuting Jesus who had died and had truly risen; Jesus living in his Church, living also in Stephen, whom he had indeed seen die but who was certainly living now together with his risen Lord. We could almost say that in the voice of Christ he heard that of Stephen, and in part because of his intercession divine grace touched his heart. It was in this way that Paul's life was radically changed. From that moment on, Jesus became his justice, his sanctity, his salvation (cf. 1 Cor. 1:30), his everything. And one day, he too would follow the footsteps of Jesus as Stephen had done, shedding his own blood in witness to the Gospel, here, in Rome."

"Dear brothers and sisters," Benedict XVI concluded, "in Saint Stephen, we see the realization of the first fruits of the salvation that the Nativity of Christ brought to humanity: the victory of life over death, of love over hatred, of the light of truth over the darkness of deceit. Let us praise God that this victory permits many Christians today not to respond to evil with evil, but with the power of truth and love. May the Virgin Mary, the Queen of Martyrs, obtain for all believers that they may courageously follow this same path."
+++++++++++++++++++++++++++++++++++++++++++++++++++
Disclaimer

Pity they wouldn't start kidnapping a few of their irish counterparts.