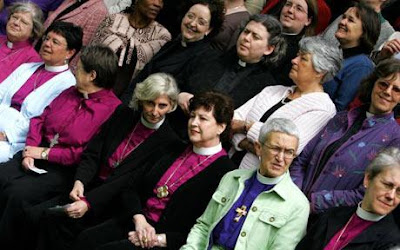 A new class of cleric is to be created for traditionalists in the Church of England who are opposed to women bishops in an attempt to avert a deep split over the issue.

The priests, known as complementary bishops, will be allowed to hold church services including Holy Communion, conduct baptisms and consecrate burial grounds in parishes that do not want the controversial innovation of female bishops.

However the compromise move is unlikely to win over those who are strongly against the historic reform.

Complementary bishops must be male and must agree not to take part in ceremonies to make women priests or bishops. Parishes or individuals can "petition" to have a complementary bishop provide services and pastoral care for them if either they cannot accept women priests or bishops under any circumstances, or if they just do not want female clergy in their local churches.

The arrangements are described in a new Code of Practice drawn up by a Church committee, in order to prevent a mass exodus of Anglo-Catholic and conservative evangelical clergy and worshippers who believe that scripture and tradition hold that bishops must be male.

More than 500 clergy left the Church, with many converting to Rome because of its complete ban on female ministers, after the first women priests were ordained in 1994.

Similar warnings were made this year after an emotional debate at a meeting of the Church of England's governing body, the General Synod, in July that ended with one bishop in tears after measures were rejected that would have appeased traditionalists.

The chair of the Church group that is drafting legislation to allow women to become bishops, the Rt Rev Nigel McCulloch, Bishop of Manchester, said: "The General Synod mandated us to draft a Measure including special arrangements, within existing structures, for those unable to receive the ministry of women bishops and to do that in a national code of practice. We believe we have achieved that by providing for male complementary bishops, as we suggested in our earlier report, and now hand our work to the Synod to discuss the drafts in detail."

But papers published by the group on Monday also disclose the limits of the powers of the complementary bishops, which make it unlikely they will win the approval of those opposed to women's ordination.

The Archbishops of Canterbury and York will be able to nominate men to serve as complementary bishops. But they will be selected by, and answerable to, the local diocesan bishop rather than directly to the Archbishop of their province, as a proposal put forward earlier this year suggested.

This could mean they have to report to a female bishop, or to a male bishop who has consecrated women, while their ability to ordain more traditionalist clergy will be limited.

The Code of Practice, meanwhile, is not legally binding and so liberal bishops who believe it is discriminatory against women could simply choose to ignore it and not provide complementary bishops in their dioceses.

The Bishop of Fulham, the Rt Rev John Broadhurst - who branded Synod "sinful" for going against the Bible by allowing women into the episcopate - said complementary bishops would not appease Anglo-Catholics.

They are holding out for a completely new province whose all-male clergy would be able to minister to parishes across the country.

Bishop Broadhurst said: "We've always said that without jurisdiction, it simply won't do for us. A Code of Practice is a fudge and it can't provide what we want."

He claimed the only solution was for the Church to start again on the legislation from the start.

The plans will be discussed at the London gathering of the Synod in February, but it will be another five years at least before any women are consecrated as bishops.

The new papers also allow the existing arrangements of "flying bishops", for those who cannot accept the ministry of women priests, to continue for another five years.