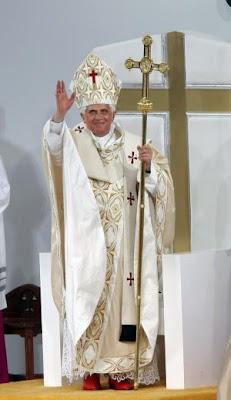 He may draw adoring crowds, but Pope Benedict says he’s no rock star.

Benedict was commenting Monday on how some people view World Youth Day celebrations.

He says such a view sees the gathering as a kind of "rock festival with the Pope as star."

But he says the ability of young Catholics to create a sense of community during the meetings shows they are more than just parties.

"In this way also the Pope is not the star around which everything revolves," he said. "He is totally, and only, the vicar" or God’s assistant in bringing out the "fruit of the Holy Spirit."

Benedict attended the youth event in Cologne, Germany, in 2005, and the one this past summer in Sydney, Australia.