Digging in their heels 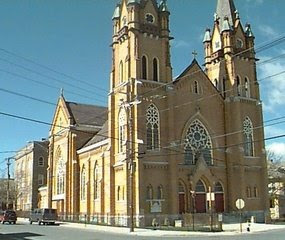 Parishioners of St. Stanislaus Kostka Catholic Church did not go softly into the night.

Even though the final service was conducted Sunday, vigil volunteers were still in the church Monday, even sleeping there.

Nine parishioners remained to protest the Diocese of Springfield's decision to close the 106-year-old building.

They sat in pews chatting, sharing memories and organizing the vigil schedule to ensure there will be someone in the church at all hours of the day.

On New Year's Day, St. Stanislaus and St. Thomas Aquinas will be consolidated in the Notre Dame parish under the new name of Pope John Paul the Great, according to a ruling announced in August by Bishop Timothy A. McDonnell.

The diocese closed six churches in Pittsfield over the summer and announced that it would close six more in the county by the end of the year.

On Monday, Christmas decorations still adorned the frigid interior of the church, as did the multitude of saints and angels in paintings, murals and sculptures.

"We're feeling positive, even though the odds are against us," volunteer Henry Tomkowicz said. "You have to have hope."

The volunteers expressed determination to keep the church alive, saying they'll continue their efforts for as long as it takes.

"This parish is filled with fighters," said Susan Kieltyka Frost. "We're fighting to keep the traditions alive. It goes back 106 years to our ancestors who built it. So we're not willing to let it go by the wayside. But the bishop doesn't realize that."

The Diocese of Springfield issued no statement on Monday. Parishioners have appealed McDonnell's ruling to the Vatican, but that process could take years.

Sunday night, volunteers slept on the floor between the pews in sleeping bags with extra blankets. Supporters stopped by every now and then with care packages of food and drinks.

Peter Borre, a member of the Council of Parishes — a group fighting church closings in the Boston area — said the vigil at St. Stan's is a worthy effort, and that similar vigils have resulted in church reopenings.

Borre said nine vigils have been mobilized in Boston, and four have spurred the archdiocese to reopen them. Five other vigils are ongoing, Borre said.

Tomkowicz said critics of the vigil simply don't understand the devotion that parishioners feel for St. Stanislaus, the center of their religious life.

Frost said St. Stan's is the last of the county's Polish Catholic churches.