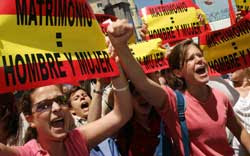 A many as a million persons are expected to attend a Mass in Spain’s capital on December 28.

Organized with the theme “Family: by the grace of God”, the Mass for the Family has meant that at least one thousand buses have arrived from all over Spain for the event.

This is the second time that the Catholic Church in Spain has marked the event, while this is first time that multitudinous Mass will be celebrated.

Starting at 11 a.m. Madrid time, organizers expect participation from the numerous lay movements of the Catholic Church in Spain.

They will listen to a message directed to the Spanish people from Pope Benedict XVI from St. Peter’s Square in Rome and then attend the Mass, which will be celebrated by Cardinal Antonio María Rouco Varela with assistance from 40 bishops.

Hundreds of priests are expected at the event, accompanying their flocks to the occasion. It is expected that the event will end by 2 p.m.

The Mass for the Family will be held at Madrid’s Plaza Colon, dedicated to Christopher Columbus and the discovery of the Americas. The platform for the assembled clergy and participants is said to measure some 75 feet in length, 30 in width, and is 8 feet high.

It will be surmounted by a giant cross and have two more platforms: one for the choruses and another for the media.

Behind the platform will be a giant screen for projecting video, plus many smaller ones located throughout the neighboring streets for the congregation to view the proceedings.

Three thousand volunteers have been assembled to assist, while there are also 325 security and health personnel. Thousands of people are expected to receive Holy Communion either at the event or neighboring parishes.

Pro-family groups in Spain have praised the event, which falls on the day when Catholics celebrate the Feast of the Holy Family.

Benigno Blanco, president of the Family Forum of Spain noted that the Catholic Church is the “heroic defender of the family in the 21st century, when it is suffering under the greatest assault in the history of humanity.”