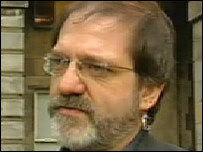 CHURCH of Scotland minister and former city council leader Ewan Aitken has accused the Pope of teaching death rather than love.
It follows Pope Benedict XVI's end-of-year address which provoked anger from gay campaigners, who interpreted him as arguing that "saving" humanity from homosexual or transsexual behaviour was as important as saving the rainforests.

The Pontiff called on the Church to protect man from the "destruction of himself" saying that tropical rainforests deserved protection but man as a creature "does not deserve any less".

In Councillor Aitken's blog, headed "The Pope teaches death not love", he said: "The Pope has crossed the line when he suggests that 'saving the world from homosexuality' is more important than saving the environment.

"There is nothing more important than saving the planet. The human race is in self-destruct mode but not over who we love and how we make love but how we are treating the planet without which there will be no place to make or be in love (or both)."

Cllr Aitken went on to say the Pope should spend "what moral authority he may have" calling people to consume less and care more about their carbon footprint than worrying yet again about who is sleeping with whom.