Pope to visit Holy Land in May 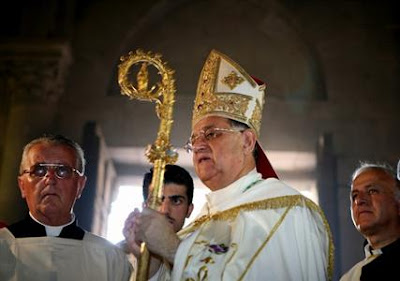 Pope Benedict XVI will visit the Holy Land in May on his first trip to the region as pontiff, Jerusalem's Latin patriach said on Monday.

"With joy we would like to announce to you the desire of His Holiness Pope Benedict XVI to visit the Holy Land as a pilgrim next May," Fuad Twal, the Catholic leader in the Holy Land, told reporters.

It was the first official confirmation of Benedict's widely mooted trip to the region -- his first since being elected pope in 2005.

"The supreme pontiff wishes to pray with us and for us, and to acquire a first-hand knowledge of the hard conditions of our region," Twal said in his Christmas message.

"We are confident in the Lord that this pontifical pilgrimage and pastoral visit will be a blessing for all of us as well as a substantial contribution to better understanding among the various nations of the region, lifting the barriers and helping solve the problems, removing distress and consolidating good relations among people, religions and denominations," Twal said.

He did not give specific dates.

"We are studying the programme with the local authorities," he said.

Last week the Italian newspaper Il Foglio said the pope would travel to Jordan, Israel and the Palestinian territories from May 8 to 15.

According to Il Foglio, the pope will celebrate mass in Jerusalem and again in Nazareth and Bethlehem where he will meet Palestinian Authority president Mahmud Abbas.

No meeting is planned with representatives of the radical Islamist group Hamas which controls the Gaza Strip, the report said.

Earlier in December, Israeli President Shimon Peres said he met a Vatican delegation to discuss preparations for a possible visit by Benedict to Israel next year.

During a visit to Italy in September 2007, Peres invited the pope to Israel.

The pope responded that he would be happy to accept the invitation, but no date was set.

Already uneasy relations between the Vatican and Israel have been further strained by the prospect that Nazi-era Pope Pius XII will be declared a saint, despite widespread criticism of his inaction during the Holocaust.

The controversy, which has lingered for decades, resurfaced in October as the pontiff defended the memory of his wartime predecessor and said he hope his beatification - the first step towards sainthood - would go forward quickly.

But, citing Jewish sensitivities, the Vatican later indicated that Benedict was holding off the beatification process.

Peres has stressed that the row should not affect plans for the proposed papal trip.

Benedict's visit will come at a time when Church leaders bemoan a shrinking Roman Catholic population in the Holy Land over recent years.

"Churches suffer from the ongoing emigration of the Christians due to the lack of peace and the deterioration of the political situation," Twal said.

He also railed against the greed, injustice, violence and persecution that he said beset the Holy City, as well as "the building of settlements that strangle it."

"All this makes us anxious for the future of the Christian community in the Homeland of Christ," Twal said.