Willpower no use in overcoming addiction, says former bishop 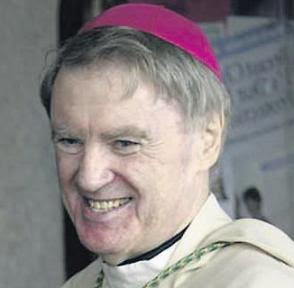 Telling people with addiction problems that they should use will-power to overcome them is futile, according to former bishop Brendan Comiskey.

Speaking this month at a novena in Shannon, Co. Clare, the ex-bishop, who himself developed an alcohol problem while he was bishop of Ferns, said that the word ‘will-power’ should not be even mentioned when talking to someone about an addiction.

“Willpower has nothing to do with alcoholism and an alcoholic is powerless over alcohol,” he declared.

“If you say to an addict ‘Do you not have willpower?’, he will say to you ‘the next time you have diarrhoea, try willpower!’, Dr Comiskey told five hundred people attending the novena.

“Don’t even mention the word willpower when you’re talking to an alcoholic”.

“Willpower is completely irrelevant,” claimed the former bishop, who resigned following controversy over his handling of clerical sex abuse in his diocese.

Dr Comiskey said he agreed with the view of temperance campaigner and reformed alcoholic Matt Talbot that giving up drink was as impossible to a person with alcohol addiction as raising someone from the dead.

He also strongly endorsed the approach to addiction of Alcoholics Anonymous, saying that while an addict could “not see life being at all possible or bearable after stopping drink,” many former addicts had been helped through membership of AA to see a life be beyond their wildest dreams

And the former bishop warned that anyone who spent time wondering if they had an alcohol problem was very likely correct.