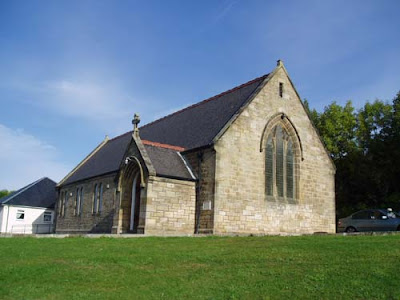 THIEVES who broke into a Catholic church in the run-up to Christmas later tried to sell the communion wine.

Canon Hugh White said his congregation let out "gasps of horror" after he told them about the theft – the second break-in in three years – following a service on Christmas Day.

A number of religious artifacts used during communion at St Margaret's Church in Gorebridge, Midlothian, were stolen during the raid.

Fortunately, police managed to recover the property worth around £5000 in time for the three services held to celebrate Christmas at the 104-year-old church in Lady Brae.

The thieves had even tried to sell bottles of altar wine used during communion following the break-in which took place between Sunday night and Monday morning. Other items were recovered from a pawnbrokers.

Gold and silver communion chalices were taken during the earlier raid in October 2005. It was believed that the thieves had been searching for £10,000 in charity money raised at a garden fete.

Canon White said: "They removed the protective coverings from a window and smashed through the glass so they could climb into the sacristy. That room was locked so they could go no further.

"They tried to move the safe, but it was obviously too heavy and couldn't be opened. Bottles of altar wine and items of worship were taken from a cupboard.

"Whoever broke in must have cut themselves on the glass because there were pools of blood all over the place.

"The bottles were all marked 'for use in communion services'."

The thieves stole a gold-plated 16in monstrance, a vessel used to display the host, which was worth nearly £3000. Gold plates, a holy water holder, a communion set and candle snuffers were also taken.

Canon White added: "Everyone was very helpful and pulled together after it happened. A glazier was kind enough to come straight out to fix the window. Obviously this is a busy time of year at the church so I could do without these kind of incidents.

"I didn't tell the congregation until after the Christmas Day services were over. When I did, there were gasps of horror. They were upset that this had happened to the church again, particularly at this time of year.

"You begin to think that nothing is sacred anymore.

"We were delighted that the police were able to recover our property before the services.