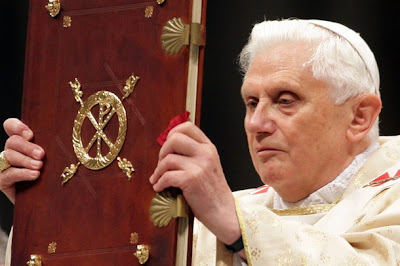 THE Christmas angel tells us: "Fear not, for I bring you good news of great joy for all people."

The Pope, on the other hand, has been using this Christmas season to spread entirely the opposite message, a message of fear and exclusion that seems more bad news than good.

For, apparently, gay people threaten the existence of the planet in a way that is comparable to the destruction of the rainforest.

So where does this religious obsession with making babies come from? I had a moment of epiphany some years ago in a refugee camp in southern Gaza. So many families had so many children, often a dozen or more. It was explained to me that women were regarded as part of a wider demographic struggle, and that having babies was vital to the war effort.

The writers of the early Hebrew scriptures were similarly caught up in a struggle for survival that made having babies a part of one's moral duty. Right at the beginning of the Bible, Noah is told by God to "be fruitful and multiply".

Later Abraham complains that "I continue childless", to which God replies: "I will multiply your descendants as the stars of the heavens, and all this land of which I have spoken I will give to your descendants, and they shall inherit it for ever."

This is the great obsession of much of the early history of the people of Israel. From this perspective, fertile women are politically valuable, and infertile women, homosexuals and eunuchs considered almost traitorous.

Thus, for instance, the rather bizarre stuff you get in Deuteronomy that "no one whose testicles are crushed or whose penis is cut off shall be admitted to the assembly of the Lord".

But there's a twist here. For when it comes to the book of Isaiah, Jesus' favourite book of the Hebrew scriptures, this more enlightened biblical author realises that the obsession with children has warped the moral values of his culture.

Inclusion is not a piece of trendy modern theory. It is a biblical imperative. Those who take the Bible as if it were a reference book cannot mentally accommodate the idea that the story being told is about the developing consciousness of the people of Israel, of how they got it wrong and how they are led to a new understanding by God.

For Christians, especially, this new understanding is that God is there for all; that, as St Paul is very keen to insist, you don't even need to be a Jew for God to be there for you. Which returns us to the message of the angel: that Christ is good news to all. This is the ultimate communication of religious inclusion.

The broader theme of the Pope's address concerns gender theory. His idea is that trendy philosophy has obscured the distinctiveness of male and female, which ought to be regarded as rooted in the order of creation. As it happens, evangelical Christians are often incredibly suspicious of this sort of line. They are afraid that it endorses the argument that, because homosexuality is actually prevalent in nature, and because people seem to be "born gay", natural law ethics could be won round to regard homosexuality as natural and thus good.

In light of this, conservative evangelicals have begun to take an interest in precisely the sort of gender theory that the Pope excoriates. It seems bizarre to me that evangelicals have started to read postmodern philosophers such as Michel Foucault with approval, but what they argue is that because our sexual inclinations are not stubbornly rooted in nature, they are more plastic and thus they are capable of being changed. In this way they can argue that gay people are not gay because of intransigent nature but because of wilful disobedience. Foucault would turn in his grave.