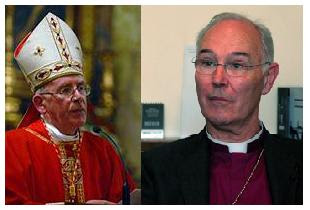 The fall from grace of Adam and Eve was a greater disaster than the current financial crisis, Cardinal Sean Brady said in his Christmas message.

Preaching in St Patrick's Cathedral, Armagh, the Primate of All Ireland said that there was quite a lot of doom and gloom around in what economists described as the worst financial crisis for over a century.

"The fall in share prices and the loss of asset values have caused huge worry and suffering," he said. "Recovery plans are being put in place to avoid disaster."

But the Cardinal added: "The fall of our first parents from grace and the loss of God's friendship were infinitely greater disasters."

Cardinal Brady went on to urge Catholics to avail of God's spiritual recovery plan through humbling themselves before Christ, acknowledging their sins.

In his Christmas sermon the Anglican Primate of All Ireland, Archbishop Alan Harper, called on people today to be less "risk averse" and become more trusting in God's faithfulness.

"Based upon the rock-solid certainty of God's faithfulness to all who trust him, may we, ourselves, begin to see others -- including those whom we have regarded in some fashion as opponents -- as folk with whom we are prepared to engage in trust for the future," he said.

"Nothing could be farther from the essence of the Christian faith: belief in Jesus Christ is belief in one who saves."

Archbishop Martin said that the celebration of the birth of Christ would lift from people's hearts the bonds of fear and bring a true sense of peace into their hearts, into their families and into their world.