Possible change to Communion on the tongue 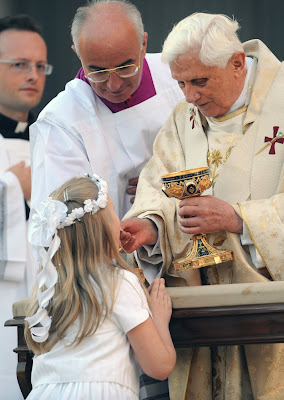 Incoming Prefect of the Congregation for Divine Worship and the Discipline of the Sacraments, Cardinal Antonio Canizares Llovera has praised receiving communion on the tongue as recognising the real presence of Jesus Christ.

Cardinal Canizares Llovera made the comments in a telephone interview with a Madrid newspaper, Catholic Culture reports.

"It means adoration, it means recognising the real presence of Jesus Christ in the Eucharist; it means respect and an attitude of faith of a man who prostrates before God because he knows that everything comes from Him, and we feel speechless, dumbfounded, before the wondrousness, His goodness, and His mercy.

"That is why it is not the same to place the hand, and to receive Communion in any fashion, than doing it in a respectful way.

It is not the same to receive Communion kneeling or standing up, because all these signs indicate a profound meaning. What we have to grasp is that profound attitude of the man who prostrates himself before God, and that is what the Pope wants," the new Prefect said.

An interesting comment is found on the dailykenoshan.com web-site set up by Fr Frederick Heuser (died. 2006)

“Now one thing the Church has always stressed is that a sacrament is administered by a duly authorized minister. That is usually a bishop, priest or deacon, or when needed, an extraordinary minister of Communion who is a religious or a lay person.

"Matrimony, of course, is always administered by the couple to each other. But when a person received Communion in the hand he administers the sacrament to himself.

"This is not even done by the ministers of the Mass; only the celebrant or concelebrant gives Communion to himself. The assisting ministers, be they clerical or lay, have the sacrament administered to them.

Another slap in the face of Vatican II Liturgical reform. . . so sad!